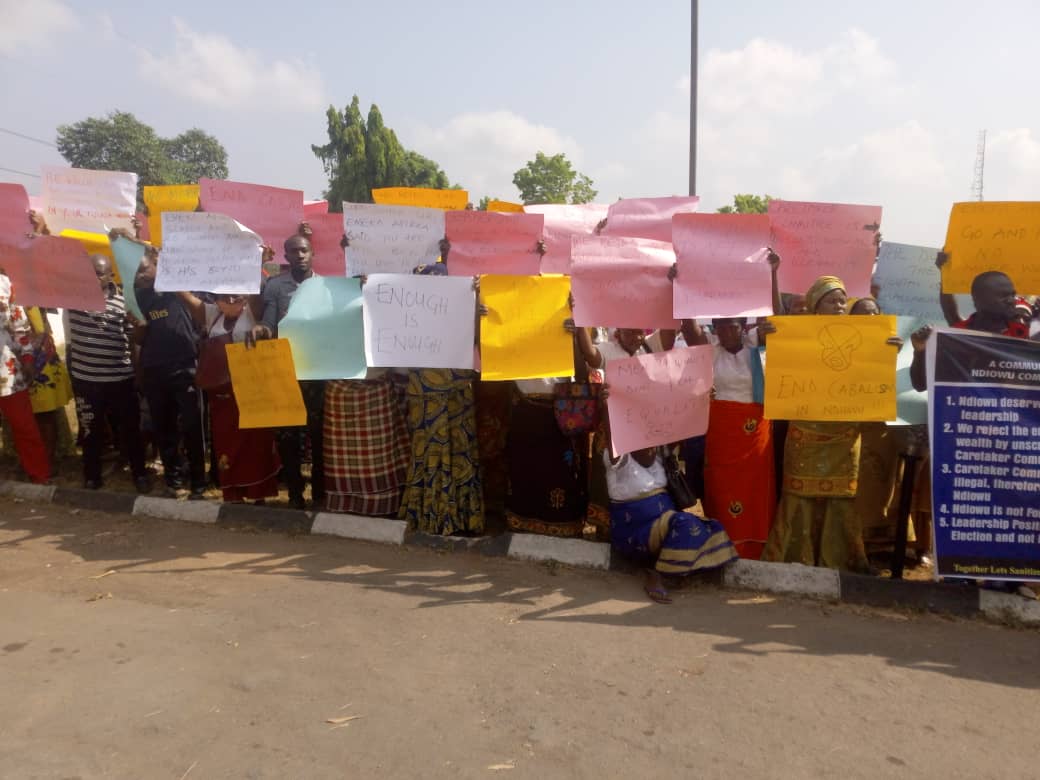 People of Ndiowu Community, Orumba North Local Government Area of Anambra has called on the state government to intervene in the brewing crisis in the community over town union leadership.

They made the call during a protest at the Government House on Monday, claiming that the continued use of appointed caretaker team in the last five years was responsible for their underdevelopment and misappropriation of the commonwealth by a few influential members of the town.

Inscription on some of their placards included “End Cabalism Now”, Emeka Aforka Go and Path No More”, “Ndiowu is Not for Sale”, “We Reject the Imposition of Candidates by Cabal”, “No Election, No APGA “, “Ndiowu Needs Lasting Peace” among others.

Chief Ikechukwu Orji, an elder in Ndiowu, who spoke to journalists, said the community had conducted town union election three times but the ‘cabal’ refused that the will of the people should stand by ensuring that government did not accept the results.

Orji said the `Community Choose a Project Fund’ which every community got N20 million from the state government had not been judiciously used as there was nothing to show for the monies received so far.

According to him, the community was in darkness and needed the urgent assistance of the state government against the forces acting against peace and progress of Ndiowu.

“When we conduct an election, they will sit on it and continue to rule us through their proxies in the caretaker committee, we need the state government to liberate Ndiowu against dark forces,” he said.

On her part, Mrs Obiageli Nwafor, who spoke on behalf of the women, said Ndiowu women tasked themselves to build the community market but expressed surprise that the ‘cabal’ claimed before the governor that they built lock-up shops for them.

“Our women contributed N500 each for the construction of Oye market in our community but these people presented it to the governor as the project which they built with the Ndiowu community project fund from state government.

“We have come to tell our governor that we don’t like what they are doing to us, he should direct these people to leave us, so that we can chose our leaders ourselves.

“We have made our choice of President General before but they influenced the government to reject it, now they are ruling us through the caretaker committee,” she said.

Prof. Solo Chukwulobelu, Secretary to Anambra Government who received the petition, thanked the people for their good conduct.

Chukwulobelu said though it was necessary that government intervened, communities should on their own ensure they existed peacefully.

He said he would direct the protest letter to the Commissioner for Local Government and Town Union Matters and also draw the attention of the governor to it.