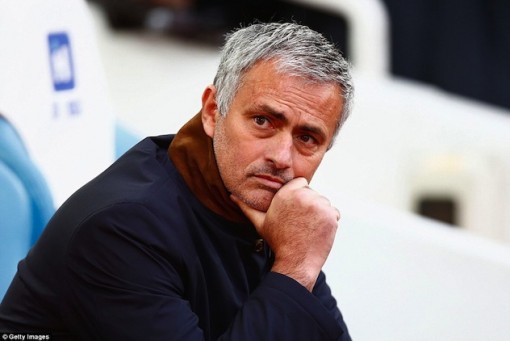 Tottenham Hotspur manager, Jose Mourinho, has claimed his players were not happy in the dressing room, following their 0-0 draw with Chelsea on Sunday.

Mourinho’s men came into the game at Stamford Bridge looking to go top with three points, after Liverpool’s 1-1 draw at Brighton on Saturday.

Spurs indeed went top with one point. But Mourinho, speaking to Sky Sports after the game, said his team was not delighted.

“My dressing room is not happy and that is the best thing to take from the game.

“We are not happy and for me that is fantastic, it is a change of mentality,” Mourinho said.

He however admitted that “it is a game where we respect them, and they respect us. No one gambled.”

When Mourinho managed the Blues in 2014, he famously described his side as a “little horse” in the title race.

And despite Tottenham starting their second successive week at the top of the table, the Portuguese said: “We are not even in the race. We are not a horse.

“I don’t know what the word is. We are the small, young horses. We are just a pony.”

Mourinho however feels Chelsea and Liverpool are one of the biggest contenders to win the title.

“They [Chelsea] are one of the biggest contenders, there is no doubt about that.

“I believe that for them it is not a problem at all to be two points behind us and Liverpool, I think.

“They know how powerful they are and the squad that they have. And they know that this is a long season. They also know that Tottenham is not a candidate,” he said.