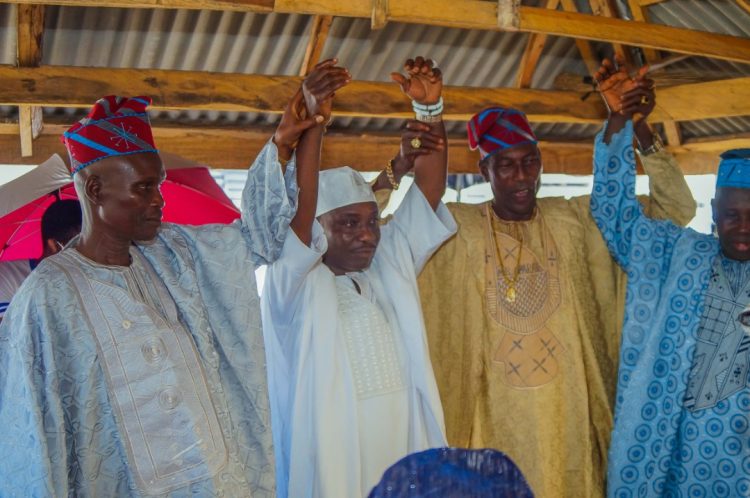 Ogunlana was unanimously adopted as the Oba-Elect by Ipatun, Oketun and Oga, which are the three quarters that make up the royal stool in Magbon Alade.

The Oba-elect was presented to the entire Magbon Alade indigenes on Sunday at a brief but colorful traditional ceremony by the kingmakers in Ibejuland.

Performing the traditional rites of presenting the Oba-elect to the townspeople, the traditionalist saddled with the responsibility said all the qualified princes from the three royal quarters were presented to Oketun and Magbon Communities for ratification, adding that Ogunlana emerged as the rightful choice to mount the throne.

Basking the euphoria of the joyful moment, the Oba-elect, Prince Adebola Ogunlana, expressed appreciation to all the royal families and kingmakers of Magbon Alade, promising not to let the town down.

Ogunlana further commended the kingmakers for particularly not ignoring the outcome of the traditional rights that eventually produced him.

The Oba-elect extended the olive branch to other contestants, who he described as very eminently qualified to mount the throne, should any of them have emerged.

He said: “Let me appeal to all the princes, who contested for this royal patun, Oketun and Oga stool to forget about the contest and let us forge ahead as a family. Originally, we are one and we should continue to be. All of us should forge ahead and be magnanimous in victory. What we all stand for is the development of Magbon Alade.”

He further appealed to the Lagos State Government to come to the aid of the Magbon Alade community by immediately ensuring electricity reaches every part of the town.

Ogunlana added that his priority as the Oba of Magbon Alade will be to work with and galvanize all sons and daughters of Magbon Alade to ensure rapid development of the community, clean water, education, health care for children and mothers especially the aged.