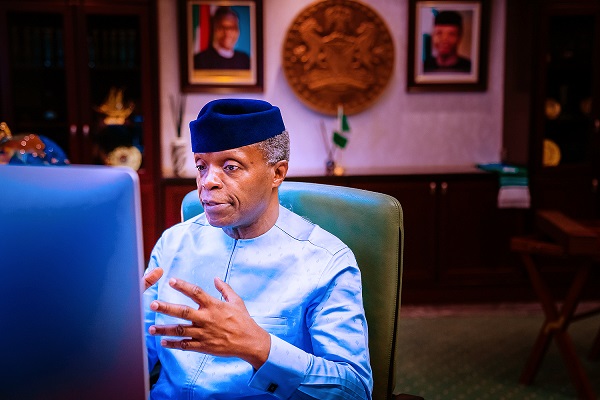 A tweet by Vice President Yemi Osinbajo in February 2015, suggesting an impeachment of President Goodluck Jonathan over security failures, has been dredged to lampoon him.

In the tweet posted on 8 February, 2015, Osinbajo said: “If the President says I’ve lost capacity to guarantee the security of lives and property, it’s certainly an impeachable offence”.

Twitter commenters are now asking Osinbajo to communicate the suggestion to the National Assembly, with the apparent failure of Buhari to secure lives and property.

“Prof. Yemi Osinbajo should contact the Senate already for the impeachment process of Buhari. He should stand by his word”, wrote Emmanuel Temitope.

Gideon Ekong, while showcasing the 2015 tweet, gave a more brutal blow: “Mr President and Honorable Osinbajo. Y’all had all the answers in 2015. What happened? What did Nigerians do to have this level of incompetence unleashed on us?”.

The 2015 comment is just one of the issues he was attacked over.

Some commenters made comparison between him and wannabe VP Peter Obi.

Some questioned his silence, while others provided excuses for him, over what critics deemed to be his failings.

Here are some of the Twitter posts on Osinbajo:

All Osinbajo Media handles, I mean all of them were loudly silent on the #ZabarmariMassacre.

If you see Osinbajo,run for your life,the man may be the Anti-Christ.

"The intellectual capacity of the Vice President has impacted positively on the overall accomplishments of Federal Government, most notably, in the economic and social intervention programmes." Mr President to VP Osinbajo pic.twitter.com/PxkgBQ4f7c

Is it true that Prof Yemi Osinbajo SAN is Vice president Academic?

It amazes me how people keep dragging Osinbajo into everything. He’s not the GCFR and as such can’t give them orders. He can only do that either as President or an acting President. I remember how he fired the then DSS boss due to incompetency but he did that as acting president. pic.twitter.com/Ih83D3uupR

VP Osinbajo is the second-in-command to the President of Nigeria in the Government of Nigeria.
Do you know? The relative power of the Nigerian vice president's office depends upon the duties delegated by the president.

Let's learn to channels our grievances to the right office. pic.twitter.com/BIjcgQ4fLR

It irritates me as everyone isn’t even talking about the VP. @ProfOsinbajo is a Disgrace to the SW. A Professor of Law and a Pastor who sold out his soul to the Devil because of power. With all due respect sir.. Fuck You. Yes I said it and my name is Adeshinaayo Abraham Balogun.