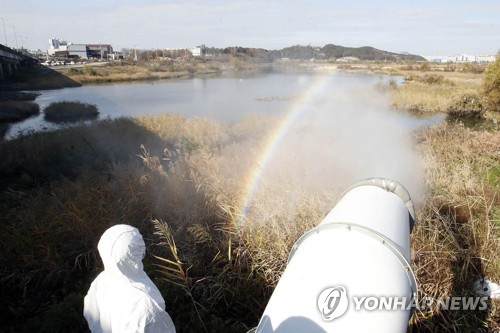 A suspected case from an egg farm in Sangju, 270 kilometres southeast of Seoul, earlier this week tested to be a highly pathogenic H5N8 strain of bird flu, according to the Ministry of Agriculture, Food, and Rural Affairs.

Local authorities said they are currently culling 188,000 chickens being raised at the farm, along with 120,000 quails.

South Korea plans to further slaughter 251,000 chickens within a 3-kilometre radius of the infected farm as well.

The authorities also plan to carry out tests on all farms within a 10-kilometre radius and issue a 30-day movement ban.

On Nov.28, South Korea confirmed a highly pathogenic AI case at a duck farm in Jeongeup, the first such case to be reported from a poultry farm since March 2018.

Authorities have culled around 400,000 domestic birds due to the infection from Jeongeup.

The ministry said there was a small creek around the infected farm, which can serve as a habitat for wild birds.

They are investigating whether the two separate cases from local farms were related.

“There are also major overseas cases in Europe and Japan. As the number of migratory birds will increase here through January, another highly pathogenic case can be found anywhere,’’ he added.

A transport ban has been imposed on poultry farms and related facilities, as well as their automobiles, in North Gyeongsang Province and Chungcheong Provinces, through Thursday.

South Korea has raised its guard against the disease since late October, when it found highly pathogenic bird flu near a creek in Cheonan, 92 km south of Seoul. It was the first confirmed case of avian influenza from wild birds in 32 months.

The ministry said earlier in the day that two additional cases from wild birds were confirmed, in Anseong, 77 kilometres south of Seoul, and Jeongeup in North Jeolla Province, raising the total cases here since October 12.

Highly pathogenic avian influenza is highly contagious and can cause severe illness and even death in poultry.

“Considering that the country has confirmed 12 highly pathogenic AI cases from wild birds since October, we are in a critical situation,’’ the ministry said.