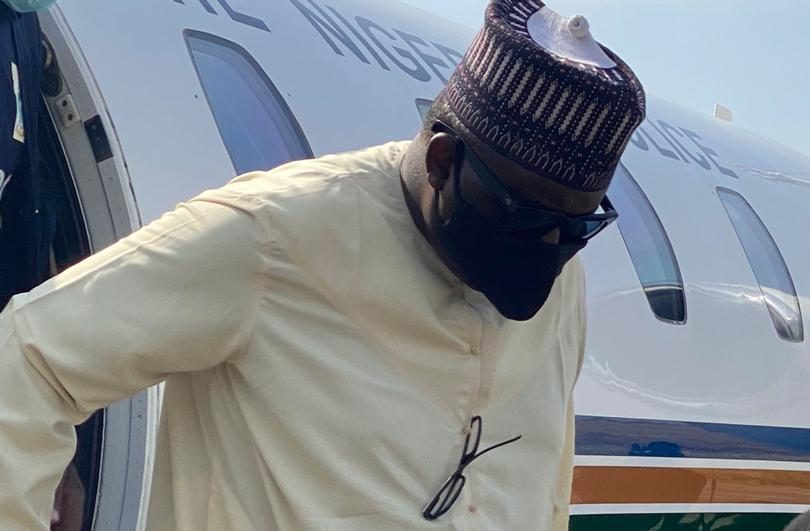 Chairman of the defunct Pension Reform Task Team, Abdulrasheed Maina has been extradited back to Nigeria from Niger Republic.

The NPF Jet 5N-HAR that flew the fugitive back to Nigeria landed at exactly at 14:17 in Abuja.

Maina is facing a 12-count of money laundering to the tune of N2 billion by the Economic and Financial Crimes Commission, EFCC.

He jumped bail forcing the trial judge, Justice Abang Okon to issue an arrest warrant against him.

He also sent his surety, Senator Ali Ndume to jail for four days.

Maina was arrested on Monday by the Nigerien authorities after he fled the country to seek refuge in the country.

He was arrested by a combined team of the Nigerian Police Force, International Criminal Police Organisation National Central Bureau, Abuja, in collaboration with their Nigerien counterparts.

Maina is now being held by the police.

He will be handed over to the EFCC after interrogation by the police.

Here is the police statement:

The Nigeria Police Force has extradited Abdulrashid Abdullahi Maina, former chairman of the Pension Reform Task Team (PRTT), today, 3rd December, 2020, to Nigeria from Niamey, Niger Republic, where he was arrested having been declared wanted by a court of competent jurisdiction over a pending criminal trial against him.

Recall that Abdulrashid Maina was arrested on 30th November, 2020 through the collaborative efforts of the operatives of the Nigeria Police Force, INTERPOL NCB, Abuja and their Nigerien counterpart. The team from INTERPOL Nigeria, led by the Commissioner of Police INTERPOL, CP Garba Umar, having completed the necessary documentation requirements and other extradition processes, flew the wanted former Pension Boss, Maina into Nigeria aboard an NPF Jet 5N-HAR and landed at exactly 1417Hrs (Nigerian Time).

Meanwhile, the Inspector General of Police, IGP M.A Adamu, NPM, mni while applauding the trans-national/inter-agency collaborations that led to the successful arrest and extradition of the wanted fugitive, assures that necessary legal actions will follow immediately.