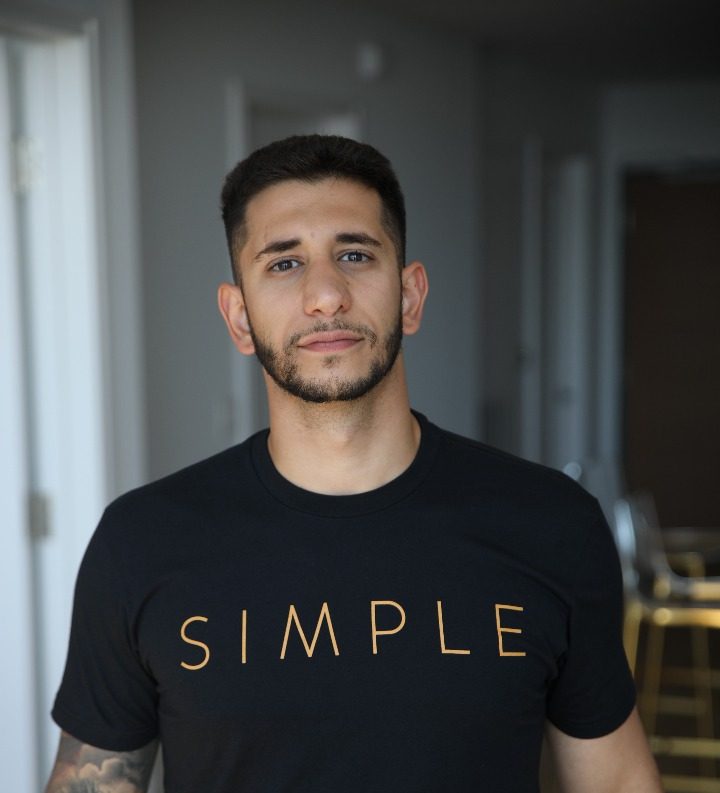 Moe Falah’s journey to starting Simple Solar was anything but linear. Leaving the company he worked under and starting his own company was a challenge, which was made even more difficult when the COVID-19 pandemic hit in March of 2020.

However, Moe’s advice to aspiring entrepreneurs remains the same. “Just go for it, don’t think about it,” he says. “Trust yourself and your gut. You will figure it out. As long as you don’t give up, no matter what, you will always figure it out.”

This advice is true to Moe’s life story. Growing up in a family that struggled to make ends meet, he knew from an early age that financial security was important to him. By 13 he was selling items he bought locally on the Internet. In high school he used the proceeds to start buying and selling used cars, and in college this escalated to flipping real estate.

“I didn’t know much about any of those industries going into them,” Moe explains. “But I knew how to figure it out. We live in the information age. Anyone can research anything. The question is, who has the boldness and grit to act on that information in massive ways?”

“Massive” is an appropriate word for the way Moe does things. After sinking $40,000 into buying a dilapidated house at the age of 19, he spent two years of trial and error learning about renovations, and how to find real estate investors when the money came out. But at the end of the massive gamble, his profit was just as huge: he sold the house for more than four times what he’d bought it for.

When he was invited to learn sales under a family friend, he brought the same wholehearted dedication to that industry.

“I sold so much that it actually caused problems,” Moe explains. “I just threw myself into it, and soon I’d maxed out the supply chain of the parent company. I sold more than twice as much as they were expecting, and I ended up losing $70,000 worth of commissions that I was owed because the company couldn’t handle my rate of sale.”

In 2019, Moe’s track record for massive sales gave him the confidence to take the next logical step: he moved to California to start a solar business.

Today, Simple Solar provides cost effective solar options to clients while promoting renewable energy sources and reducing fossil fuel dependency. After doing $25 million in sales in their first year, Moe and his team plan to accomplish $100 million in sales by the end of 2021, continuing to scale the company to greater success.

“It started out as just me and three other people,” Moe recalls. But he did what he always did: threw himself wholeheartedly into establishing his supply chain, training his businesspeople, and making sales himself. Within 12 months, his company had grown to a team of nearly 40 people who sold $5 million in November of 2020 alone.

“It’s partially strategy – I wouldn’t be where I am right now if I hadn’t researched what product I really believed in, what state to go to, and if I hadn’t had the experience that I had with previous sales companies so that I knew exactly how to make my company better. But those ideas could all have just lived in my head as pipe dreams if I hadn’t taken the plunge.”

Moe was accustomed to taking plunges. Before coming to California, he’d moved twice, guided by sales data: first to Toronto, where a top seller had promised to take Moe under his wing, and then to Florida where the disaster-proofing products he started out selling were in the highest demand. So moving to California, when he learned it was the country’s top solar market, seemed natural.

“You’ve got to be willing to make big moves if you want big results,” Moe explained. “And most of all, you’ve got to make sure you follow through.”

Moe did follow through, and he’s happy to brag about the team he’s built. “As an organization, we have some of the best leaders & trainers in the industry., that all comes from the dedication of my team. Our culture is unmatched.”

He continues, “The level of support that you get from everybody is not found often. There is a huge desire by everybody within the organization to make sure that everybody is successful and winning. We truly are a family, and we welcome those who have an excellent work ethic, a desire to win and to become the best version of themselves.”