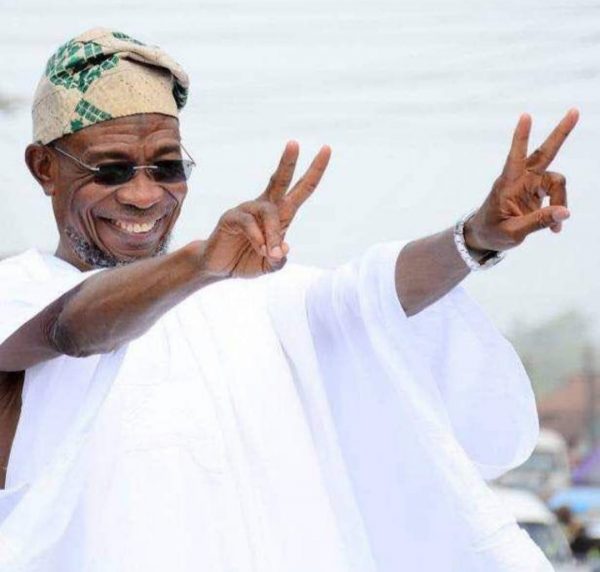 Day of Judgment for Rauf Aegbesola

Minister of Interior, Rauf Aregbesola, has received an award conferred on him by the Ijesa North Diocese of the Church of Nigeria, Anglican Communion in Osun state.

He called on Nigerians and the people of Osun to continue to support the efforts of government at bringing about socio-economic development in the country.

This, he said according to a statement by Mohammed Manga, Director, Press/Public Relations, in the ministry.

The statement quoted the minister as giving the advice at the third session of the Synod and Conferment on him, the Ecumenical and Episcopal Award, held at St Peter Anglican Church, Ijebu-Ijesa, Osun.

“I have brought with me, greetings and message of love, appreciation and affection from President Muhammadu Buhari to the Church, the Prelate and Congregation. And through them, the people of Osun and the generality of Nigerians”, the minister said.

The Minister appreciated the Anglican Diocese of Ijesa North and other churches for their support, through prayers, during his tenure as state governor, thanking them for their continued prayers even as he stepped up to a higher level of national service.

He called for continued dialogue and the use of peaceful means to resolve conflicts at all times, saying that these were necessary ingredients to stability and security of lives and property, as well as the development of the country.

Aregbesola emphasized that the nation had regrettably seen how the protests would have wiped out all our efforts of past years, which would have taken us not less than 50 years to recover from.

“This is why I said security and how we protest should be well thought out and moderated”, he said, adding, “I, therefore, urged the youth to seek knowledge, dialogue, debate and peaceful means of conflict resolution and interest articulation and pursuit.

”I also urge you to begin to think of the long-term consequences of your actions and embrace love”, Aregbesola said.

Quoting copiously from the Holy Bible, the minister counselled youth on the need to show love, especially the love of one’s neighbours, as there was no other commandment in the holy book greater than this.

”With these citations, it is without a doubt that love is the foundation of faith and hope of salvation. This love is non-discriminatory, let us, therefore, live this precept of faith in all ramifications.

“Our nation requires our love, so do the people from our communities to the states, regions and nation”, he added.

He assured that the Ecumenical and Episcopal Award conferred on him by the Bishop of Ijesa North Anglican Diocese would spur him to continue to seek peace, deepen inter-faith dialogue/accommodation, and promoting its spirit.

Earlier, Rev. Isaac Oluyamo, the Diocesan Bishop of Ijesa North Anglican Communion and Synod President, urged the Federal Government to address insecurity and youth unemployment in the country, to prevent a future repeat of the recent #EndSARS protest.

He thanked President Muhammadu Buhari for the initiative of directing his cabinet members to engage with people at the grassroots, as a step to finding lasting solutions to security challenges in Nigeria.