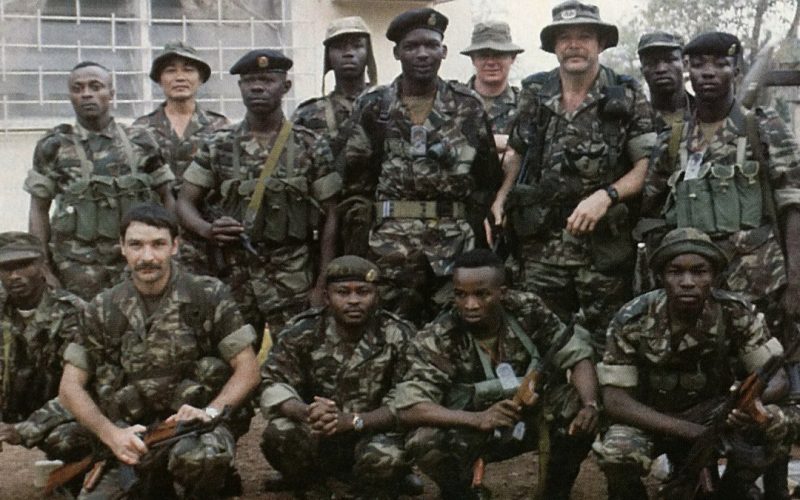 Some of the foreign mercenaries with Nigerian counterparts in 2015

Foreign military contractors, a.k.a mercenaries, who helped to contain Boko Haram insurgency in the dying months of Jonathan era have vowed never to return to Nigeria.

To enable Nigeria hold elections in 2015, Jonathan brought in contractors such as Blackwater from South Africa and also Russia, who cleared three states of Borno, Adamawa and Yobe of the insurgents.

When President Muhammadu Buhari took over, he sent the contractors away.

Now, with the military unable to protect villagers in Borno, a renewed call has been made to hire the contractors again.

Governor Umara Zulum first made the call after 78 rice farmers were slaughtered by Boko Haram on Saturday. North East Governors have backed the call.

But the contractors, who have bad memories of the Buhari administration, said they are not coming back.

According to PRNigeria, one of the facilitators of “soldiers of fortune” bemoaned the humiliations, persecutions and prosecutions of foreign mercenaries along with their Nigerian counterparts who participated in the operation after the emergence of the current administration of President Muhammadu Buhari.

He said: “In fact, some of our covert operations and activities of operatives in Nigeria including incurred casualties were exposed as working for mercenaries.

“Imagine that even highly classified and coded transactions for operational purposes were exposed as corruption.”

While noting that some of their payments for operations executed are still outstanding, he said, “It’s easier to confirm what we did because we were able to recover dozens of towns from Boko Haram from at least three states in North-East at the time. This is an open secret.”

He expressed regret and disappointment that some Nigerian military and intelligence officers who participated in the operation were not only retired, but also prosecuted and convicted.

He stated that the mercenaries find it difficult to work in a country where their operations, strategy and thinking are exposed to the media and judicial processes.

The secret agent confirmed that top government officials at federal and state levels are reaching out to them but reiterated their resolve not to come back.