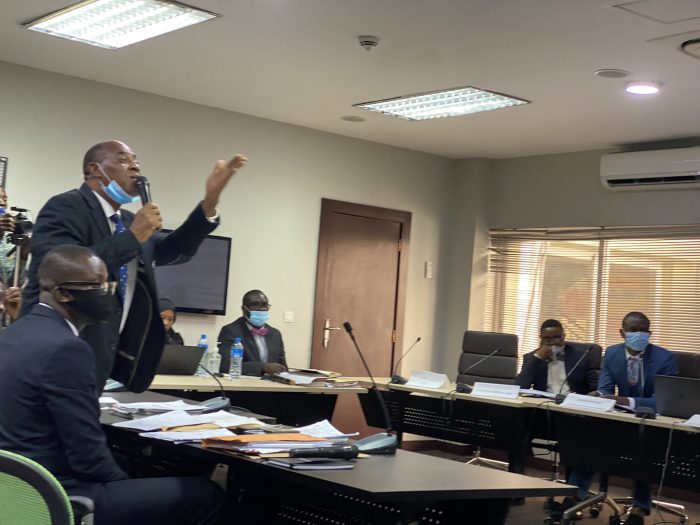 Both lawyers blew their tops when the case was presented before Justice Doris Okuwobi’s panel.

Ebosereme even claimed seniority at the bar and asked Ogunbeje to sit down as he took the floor before Justice Okuwobi.

The heated exchange made counsel to the Nigerian Bar Association (NBA) Mr. M.A. Sanni to intervene.

He urged both lawyers to comport themselves as proceeding is being aired across the world.

He reminded both lawyers, that they have a right to appeal the ruling of the panel.

Mr. Sanni also apologized to Justice Okuwobi on behalf of the NBA for the misbehaviour of the lawyers.

Justice Okuwobi also expressed disgust at the behaviour of both lawyers.

She said the quality of legal practice in the country is being jeopardised and she is not happy.

She urged both lawyers to give the NBA a good image, mind the ethics of the profession, and uphold them.

Ebosereme, counsel to the police, had claimed that since no police station or officer was mentioned in the petition, there was nothing he could have done about the case.

He asked for more specific details and urged the panel to rule for an adjournment.

Counsel to the defendant, Ogungbeje, jumped up in objection.

Ogungbeje counter-argued that the panel has no time and asked that the case be closed in favour of his client.

He prayed the panel to be fair to all parties and hear the petitioner’s testimony as he could provide more information before the panel.

The police counsel argued that such testimony cannot be heard as they cannot cross-examine the petitioner for nominal parties.

The matter was eventually adjourned until 15 Dec 2020.