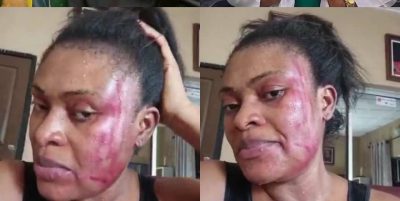 Channels TV has waded into the wife battery report against its Benue reporter, Pius Angbo, saying it is investigating it.

In a response to a viral video, in which Ifeanyinwa, the medical doctor wife of Angbo, accused him of battery, the TV station said it will take appropriate action after the probe.

“Channels Television does not condone violence against women or anyone in general.

“The domestic violence matter reported against one of our reporters is being investigated and appropriate action will be taken”, it tweeted on Sunday.

In the viral video, Ifeanyinwa , who is based in Owerri said Pius, has repeatedly been beating her up.

Ifeanyinwa mentioned that they have 4 kids, and that through out their 6 years of marriage, Pius beats her up even when she is pregnant, and even sits on her tummy.

She showed her battered face, and stated that her husband tried strangling her, even though she just had a baby through caesarean section, 4 weeks ago.