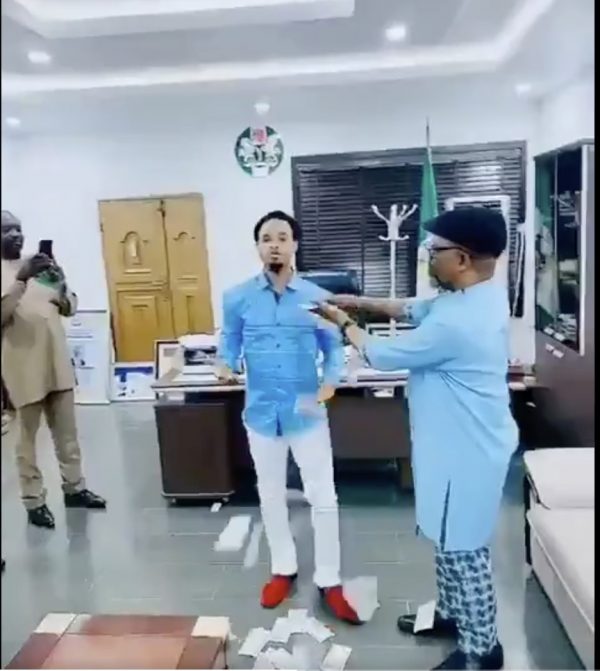 Agbazuere in his office spraying naira notes on Prophet Odumeje

Governor of Abia State; Dr. Okezie Ikpeazu has ordered the immediate suspension of Dr. Anthony Agbazuere from the office of the Chief of Staff.

No reason was given for the suspension but it came after Agbazuere became the target of public outrage for inviting self-acclaimed Prophet, Dr. Chukwuemeka Ohanaemere popularly known as “Odumeje” to the State House.

A video which surfaced at the weekend also captured Agbazuere spraying money on the Onitsha based prophet in his office, an action many said was undeserving of a public office holder.

However, the statement released by the Secretary to the State Government (SSG), Barr. Chris Ezem read: “Abia State Governor, Dr. Okezie Ikpeazu, has directed the immediate suspension from office of the Chief of Staff to the Governor, Dr. ACB Agbazuere.”

The Permanent Secretary, Government House, Mr. Alozie Odoemelam, has now been directed to perform the duties of the office of Chief of Staff until further notice.

Before the appointment, he was the General Manager of the Abia State Passenger Insurance Manifest and Safety Scheme, ASPIMS.