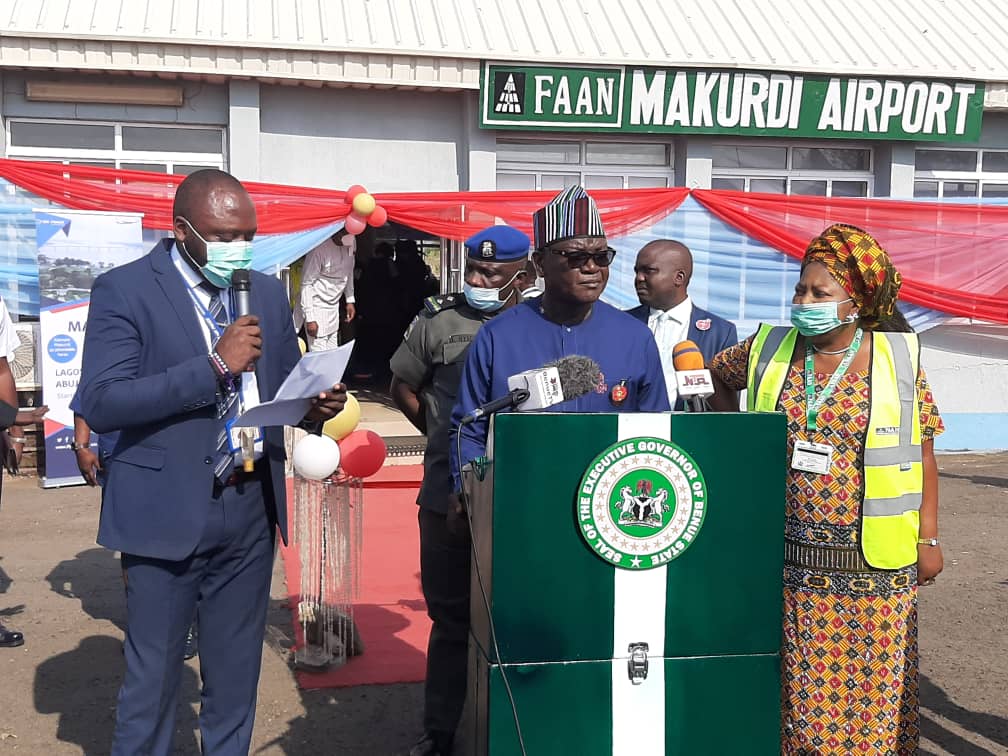 Air Peace on Monday made an inaugural flight to Makurdi in Benue state.

Governor Samuel Ortom who attended the inauguration said the newly inaugurated flight to Makurdi will further open the state to direct foreign investment.

The governor said that the partnership would attract investors into the state and allay the fears of investors who had planned to come to the state by road.

According to him, the state will further recorded remarkable progress and success story with the flight.

” This will push socio-economic development of the state and further provide greater opportunities to the indigenes.

” This will also reduce unemployment in the state.  I thank Almighty God for this historic event,” he said.

Mr George Akume, the Minster of Special Duties and Inter-Governmental Affairs,  lauded the governor for attracting the partnership of Air Peace to the state.

“Attempts that had been made to attract commercial air transport into the state had not beeb successful, but this one that was done by the governor, was a success story.

” Regular flight into the state has been a challenge, but today saw the realisation of long awaited success.

“It is a  credit to the governor. It is another proven success of the people of Benue State,” Akume said.

Mr Allen Onyema,  the Chairman of Air Peace, said that the decision to extend “their wings to Makurdi” was borne out of the original vision of the airline to interconnect various cities across Nigeria, thereby fostering unity and promoting economic relations.

Onyema, who was represented by Mr Ayodeji Adeyemi, the Grand Operations Manager, Air Peace, said the Makurdi route had actually been a popular demand by Nigerians.

He said that the new connections would be operated on Monday, Wednesday and Friday.

According to him, the airline is constantly reviewing its route network to meet public needs, while considering strategic ways of expanding the network to provide immense value to Nigerians.

“It is with great delight that I stand here today to deliver this address to mark Air Peace’s entry into Makurdi.

“For us at Air Peace, this is a historic feat as no airline currently operates flights from Lagos to Makurdi.

“And we have been earnestly looking forward to this moment and we’re glad it is finally here,” he said.

Onyema said the Makurdi route had been on the airline radar for a while since signing the Memorandum of Understanding (MOU) with the state government.

“Today, as we commence flights into Makurdi from Lagos and Abuja, we are promising that this new route will be optimally serviced and Nigerians will benefit exceedingly.

“We also pledge to work very harmoniously with all the stakeholders domiciled in the state, the aviation regulator, the airport administrator and of course, the state government to ensure maximum success.

“We’re not oblivious of the employment opportunities that this new route stands to create for the indigenes of the state as Air Peace was primarily set up to fill unemployment gaps in the country.

“And we solicit the continued support and cooperation of all relevant stakeholders for the airline to keep accomplishing lofty feats,” he added.

Onyema expressed gratitude to Gov. Ortom under whose leadership the commencement of the new route was achieved.

“We must also thank the Federal Airports Authority of Nigeria and  the Nigerian Civil Aviation Authority as well as other key stakeholders whose efforts have had a positive impact on the launching of this new route,” Onyema said.