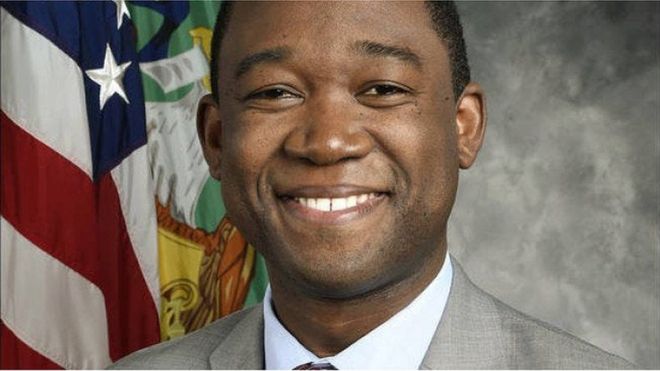 A coalition of 22 Nigerian-American organisations has congratulated Mr Adewale Adeyemo, on his nomination as the next U.S. Deputy Secretary of Treasury.

Nigerian-born Adeyemo, 39, was tapped for the role by President-elect Joe Biden on Dec. 1 and would be the first African-American deputy in the department, if confirmed.

The congratulatory message came in a statement issued by the Organisation for the Advancement of Nigerians (OAN) on behalf of the others at the weekend.

OAN said Adeyemo’s success and accomplishments were a “big deal” and source of inspiration to members of the Nigerian community in the U.S.

The nominee has served the country in several capacities, including being the first President of the Obama Foundation and Deputy Chief of Staff to former Secretary of Treasury, Jack Lew.

He served concurrently as Deputy National Security Adviser for International Economics and Deputy Director of the National Economic Council between 2015 and 2016 under the Obama administration.

OAN said that this year, the Nigerian-American community “fought hard for equity at the table” at all levels of government in the U.S., inspired by the qualification of its members.

“As we celebrate the Biden-Harris victory, Adeyemo’s nomination has catalysed our hopes and aspirations.

“We will continue to remain steadfast in identifying and mentoring the great talents in our midst,” the group said.

It also highlighted the success of other Nigerian-Americans in the Nov. 3 U.S. general elections.

They are Mr Oye Owolewa, who is now the first Nigerian-American to be elected into the U.S. Congress to represent the District of Columbia in the House of Representatives.

Ms Esther Agbaje has also made history as the first American of Nigerian descent to be elected into the Minnesota State House of Representatives.

“This is just the beginning! We look forward to playing a more active role in influencing the trajectory of leadership composition in both local, state and national elections,” the OAN added.

Tags:   Adewale Adeyemo   The Nigerian community in the U.S.