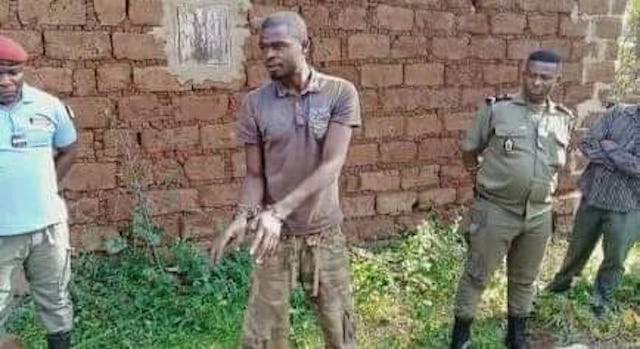 Paulin Lontsi, caught exhuming the remains of his dad in Cameroon

A Cameroonian has been arrested for exhuming the remains of his father, at the grave yard.

His plan was to sell the bones to bone traffickers for cash.

The man’s mission was however disrupted when the sister called in the police, the national Gendarmerie.

Cameroon News Agency identified the man as Paulin Lontsi of Baleghang, Batcham subdivision in the west region of the country.

He was said to be based in Congo, but returned home to carry out the nefarious act, of selling the bones of his dead father.

The man whose name we got as Paulin Lontsi recently returned from Congo where he was based, for business.

According to reports, Paulin works with a gang of bone traffickers from the Noun Division still in the west region of Cameroon as confirmed by culprit.

Investigations have been opened to apprehend the rest of the team members.