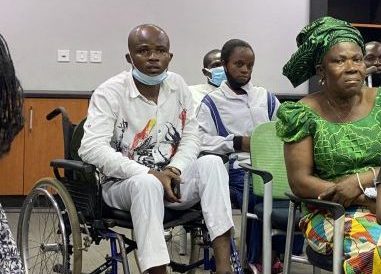 By Muhaimin Olowoporoku and Taiwo Okanlawon

Mr. Ndukwe Ekweke who petitioned that SARS brutalized him and pushed him off a two storey building breaking his spinal cord in the process has gotten a final adjournment date.

Ndukwe’s case was earlier adjourned on 1st Dec 2020 because a police witness was not available to testify against the petitioner.

Justice Okuwobi who was set to close the case gave a short adjournment date for 8th De 2020.

However, today at the hearing,  Police counsel, Cyril Ejiofor said the witness very critical to the case is stuck in traffic and cannot make it to the hearing soon.

According Ejiofor, the witness departed Enugu last night to attend the hearing today.

He asked for a short adjournment as he claims that for justice to be served and for the hearing and public to see the truth of the matter, his prayers be answered.

Ejiofor said that the witness is coming with critical video evidence which would expose the truth and shed light to all grey areas on the matter.

According to Ejiofor, they have found out the truth about what really happened between Ndukwe who claims SARS crippled him.

Ejiofor said the video evidence is enough for the panel to come to a just conclusion on the matter.

Mr. Olukoya Ogungbeje, counsel to the petitioner, however, vehemently opposed adjournment and urged that Justice Okuwobi close the case.

He stated that too much time has been given for the respondent to table their witness and evidence and they have had enough time for fair hearing.

Ogunbeje prayed for the case to be closed as there are no bases for adjournment.

Ejiofor, the police counsel countered him stating that they aim to kill justice and that a short adjournment is what they require.

The case was therefore, adjourned for Tuesday, 15th December 2020.