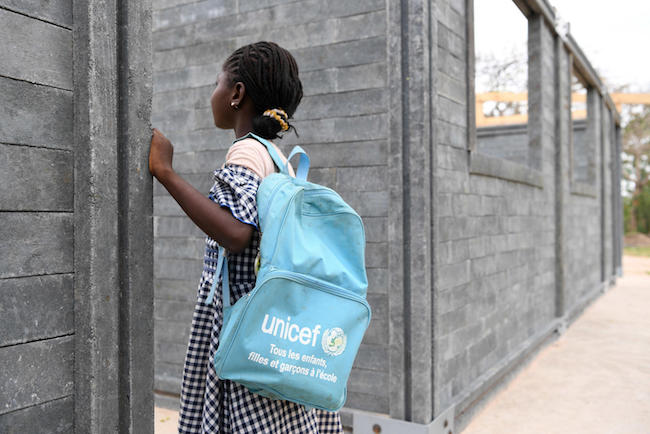 A girl in Ivory Coast looks at the construction of her new school made of plastic bricks, in Sakassou, a village in the center of Côte d'Ivoire.

UNICEF Côte d’Ivoire fights plastic pollution and ensure that every child learns in a supportive environment by building classrooms made of plastic bricks.

According to the agency, it is a wrong response that could compound the societal cost of the disease.

UNICEF Global Chief of Education, Robert Jenkins, said in a statement that 320 million children were locked out of school at the start of December.

“What we have learned about schooling during the time of COVID-19 is clear; the benefits of keeping schools open, far outweigh the costs of closing them, and nationwide closures of schools should be avoided at all costs,” Jenkins said.

He said closing schools did not help in the fight against COVID-19 but simply removed a system that provided children with support, food and safety as well as learning.

The UNICEF top official said instead of shutting schools, governments should prioritise school reopening and make classrooms as safe as possible.

“Evidence shows that schools are not the main drivers of the pandemic. Yet, we are seeing an alarming trend whereby governments are once again closing down schools as a first recourse rather than a last resort.

“In some cases, this is being done nationwide, rather than community by community, and children are continuing to suffer the devastating impacts on their learning, mental and physical well-being and safety”, Jenkins said.

He said November saw a 38 per cent jump in the number of children affected by school closures, after a big wave of re-openings the previous month.

“In spite of everything we have learned about COVID-19, the role of schools in community transmission, and the steps we can take to keep children safe at school, we are moving in the wrong direction – and doing so very quickly”, he added.

He cited a recent study by UNICEF using data from 191 countries, published by an independent non-profit foundation, Insights for Education, which showed that no association between school status and COVID-19 infection rates in the community.

He explained that UNICEF, together with the UN Educational Agency (UNESCO), the Refugee Agency (UNHCR), the UN World Food Programme and the World Bank, had also published a Framework for Reopening of Schools.

Jenkins said the publication contained practical advice covering areas such as policy reform, financing requirements, safe operations and reaching the most marginalised children, who were the most likely to drop out of school altogether.