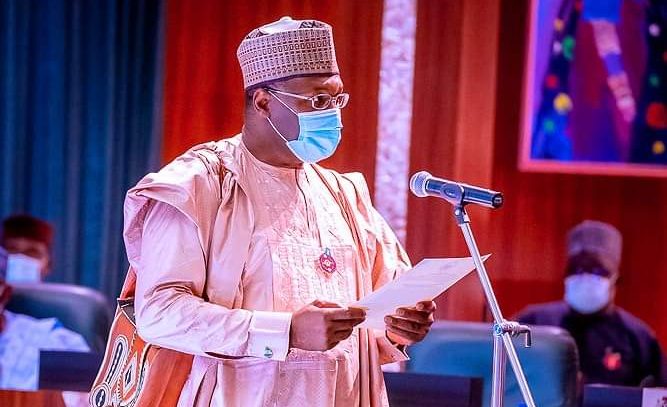 The swearing-in took place just before the commencement of the weekly virtual meeting of the Federal Executive Council, (FEC), in the Council Chambers, Presidential Villa, Abuja.

The Senate had on Dec. 1, confirmed Yakubu for re- appointment as Chairman of INEC.

Yakubu’s confirmation by the Senate followed the presentation of the report of its Committee on INEC by the Chairman, Sen. Kabiru Gaya, during plenary.

Buhari on Nov. 25, asked the senate to confirm Yakubu for a second term in office, after he re-appointed him on Oct. 27.

Yakubu is the first to be reappointed to head the commission in recent history.

Yakubu, who spoke to State House correspondents after taking his oath of office, pledged to redouble efforts towards ensuring the conduct of free and fair elections in the country.

He reiterated the commitment of INEC to partner with the National Assembly (NASS) in ensuring speedy passage of the amendment of the electoral law.

“We have clearly demonstrated in recent elections that elections are getting better and they will continue to get better.

“The National Assembly is holding a public hearing on the amendment of the electoral legal framework.

“This is important and this time around, working with the National Assembly, we will ensure a speedy passage of the amendment bill and once it is assented to, it will help us enormously in confronting the challenges ahead.

“The preparations for 2023 general elections have proceeded in earnest; we need certainty and therefore the electoral legal framework is fundamental, without which we cannot formulate our regulations and guidelines.

“Without our regulations and guidelines, we cannot conclude work on the manual for the training of ad hoc staff for the elections.

“So from here, I am going to proceed to the National Assembly, so work begins in earnest and we have already started.’’

The virtual meeting of the Federal Executive Council (FEC)is being attended by Vice-President Yemi Osinbajo, Secretary to the Government of the Federation, Boss Mustapha, Chief of Staff to the President, Prof. Ibrahim Gambari and the National Security Adviser (NSA), retired Maj.-Gen. Babagana Monguno.

The Ministers of Federal Capital Territory, Mohammed Bello as well as Ministers of State Budget and National Planning, Clement Agba, Mines and Steel Development, Uche Ogah, Works and Housing, Abubakar Aliyu and Education, Chukwuemeka Nwajiuba are also at the chamber for the meeting.

The Head of Service of the Federation, Dr Folasade Yemi-Esan and other ministers are participating in the meeting remotely from their various offices in Abuja.