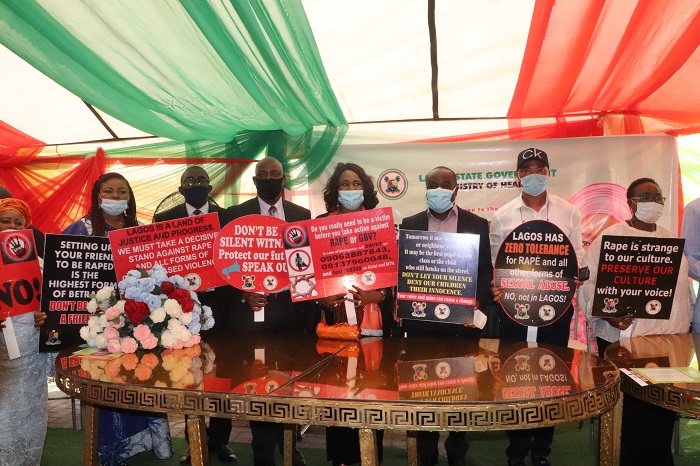 Wife of the Lagos State Governor, Dr. (Mrs.) Ibijoke Sanwo-Olu has extended the awareness campaign about gender-based violence to residents and relevant stakeholders in Alimosho area of the State.

As the global 16 Days of Activism against Sexual & Gender-Based Violence (SGBV) continues, the wife of the Lagos State Governor, Dr. (Mrs.) Ibijoke Sanwo-Olu has extended the awareness campaign about gender-based violence to residents and relevant stakeholders in Alimosho area of the State.

The first lady also used the medium to advocate for the involvement of members of the community in fighting the menace.

The Sensitization session which was held within the premises of Alimosho General Hospital was a partnership between the Office of the First Lady and the Ministry of Health to take the #SGBV campaign to the grassroots.

The wife of the Governor who was represented by the wife of the Commissioner for Information and Strategy, Mrs. Funmilayo Omotosho disclosed that the extension of the campaign to Alimosho Local Government was as a result of the high reported cases of #SGBV within the area and the need to reverse the trend.

Sanwo-Olu stated that relevant stakeholders within the local government must join hands with the State government to jointly address the menace and come forward with a very formidable strategy that will help change the narrative.

“For us in Lagos State, sexual abuse especially as it concerns women and children is an evil act that cannot and must not be tolerated. The devastating consequences are real and this is why we must sustain the advocacy and the fight against the menace to make the society a better place for all of us, and our children”, She stated.

While noting that the sustained advocacy against #SGBV is already yielding positive results, Sanwo-Olu disclosed that the Bill to establish the Lagos State Domestic and Sexual Violence Agency and the Sex Offenders Register has scaled through the Second Reading in the Lagos State House of Assembly.

“When passed into law, the Bill will go a long way to frontally tackle the menace which has assumed the position of a pandemic, help to name and shame perpetrators, and most importantly, provide medical and legal support to the victims”, She assured.

Earlier in his remarks, the Permanent Secretary, Ministry of Health, Dr. Olusegun Ogboye said that #SGBV undermines the health, dignity and security its victims.

He noted that victims of #SGBV can suffer sexual and reproductive health consequences, including forced and unwanted pregnancies, unsafe abortions, traumatic fistula, sexually transmitted infections including HIV, and even death.

Ogboye disclosed that the issue of sexual and gender-based violence is of great importance to the First Lady, adding that efforts are being intensified to secure the support of the House of Assembly to promulgate relevant laws that would help prescribe appropriate punishment for culpable individuals.

“The issue of #SGBV is going up in our community and we don’t want the worst to happen. People are dying as a result of this, women are being abused and some will never recover from the trauma in a lifetime and we don’t want this to continue, so, please, let’s take this information to our homes, our neighbourhood and to our communities.”, Ogboye said

The Medical Director of Alimosho General Hospital, Dr. Madewa Adebajo said that the choice of the Hospital for the awareness campaign is significant considering the fact that it coincides with 16-days of activities on gender-based violence across the State.

He extolled the First Lady for developing interest in the issue and other health-related affairs and also commended the State Government for citing a Sexual Assault Referral Center within Alimosho General hospital.

The Medical Director challenged mothers, guardians and all relevant stakeholders to sensitize their children both the male and female gender and people within their vicinity, stressing that it takes two persons for molestation to take place.

He, however, expressed the hope that with the support of the First Lady, the Ministry of Justice and other relevant stakeholders within Alimosho and its environs, Alimosho General Hospital will ensure that the incidences of rape and domestic violence become a thing of the past.

Also speaking at the event, a Director from the Ministry of Justice, Mrs. Oluwatoyin Odusanya underscored the need to have relevant laws in place to support the efforts of the DASTVR such that there will be appropriate punishment backed by law for perpetrators of the sexual offences.

She also advocated for the establishments of Sexual Register that will have the list of sexual offenders which can be perused by members of the public when seeking the services of individuals with good moral standing.

Odusanya said that people must begin to show concern and get interested in sex-related issues, saying that residents of the State must begin to speak out and report #SGBV cases to DSVRT or the Ministry of Justice.

The high point of the event was the signing of a symbolic pledge to restate the commitment of all stakeholders in Alimosho to a Sexual and Gender-Based Violence #SGBV Free Zone and Only to add the inspection of the Sexual Assault Referral Centre (SARC) located inside the Alimosho General Hospital which is being established by the British Council Rule of Law Program, with sponsorship from the European Union. 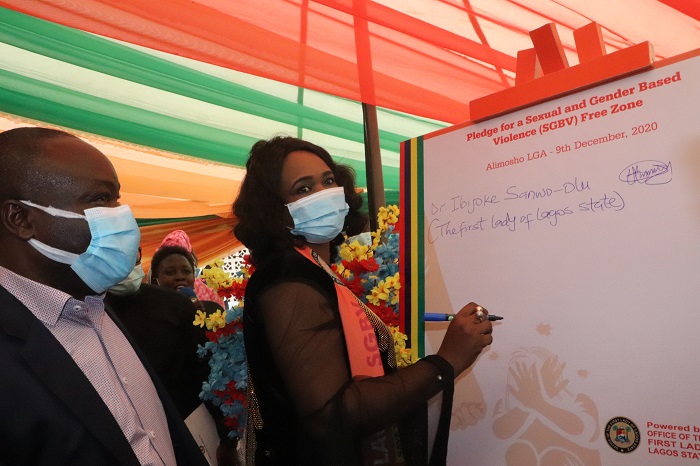