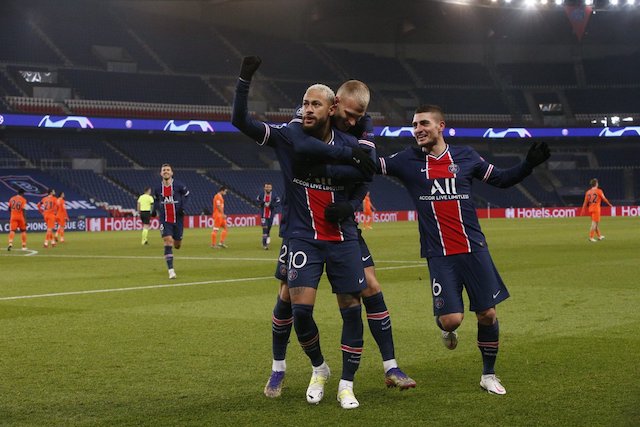 Neymar being saluted by team mates on Wednesday

Mbappe and Neymar, who has scored or set up 65 goals in 65 Champions League matches, will lead PSG into a top-of-the-table Ligue 1 clash at home to in-form Lyon on Sunday.

The defending champions are top but the five teams below them are all within five points, with Lyon two points behind the leaders.

Player to watch: Angel di Maria – Forget Neymar and Mbappe, Di Maria was PSG’s best player in the last, curtailed French season. In fact, he has probably been their standout performer since the two most expensive signings in history arrived in August 2017.

However, the Argentine has lost his place in recent weeks. His only start in PSG’s last four games came when PSG fielded a second-string XI at Montpellier. In the win at Manchester United not only did he not come on, he was at one stage stripped for action only to be sent back to his seat.

Out of contract at the end of this season — a situation that has put the 32-year-old’s future in the spotlight — Di Maria will hope for a recall against Lyon.

5 – Marseille have won their last five Ligue 1 games. Four points behind leaders PSG, they are on course to top the table if they win their two games in hand, but they face a tough test against Monaco on Saturday.

13 – After finishing 13th last season, Nantes this week parted company with coach Christian Gourcuff with the Canaries taking just 13 points from their first 13 games in this campaign. The eight-time French champions became the fourth club to change coach this season. One of the others, bottom side Dijon, are their opponents this weekend.