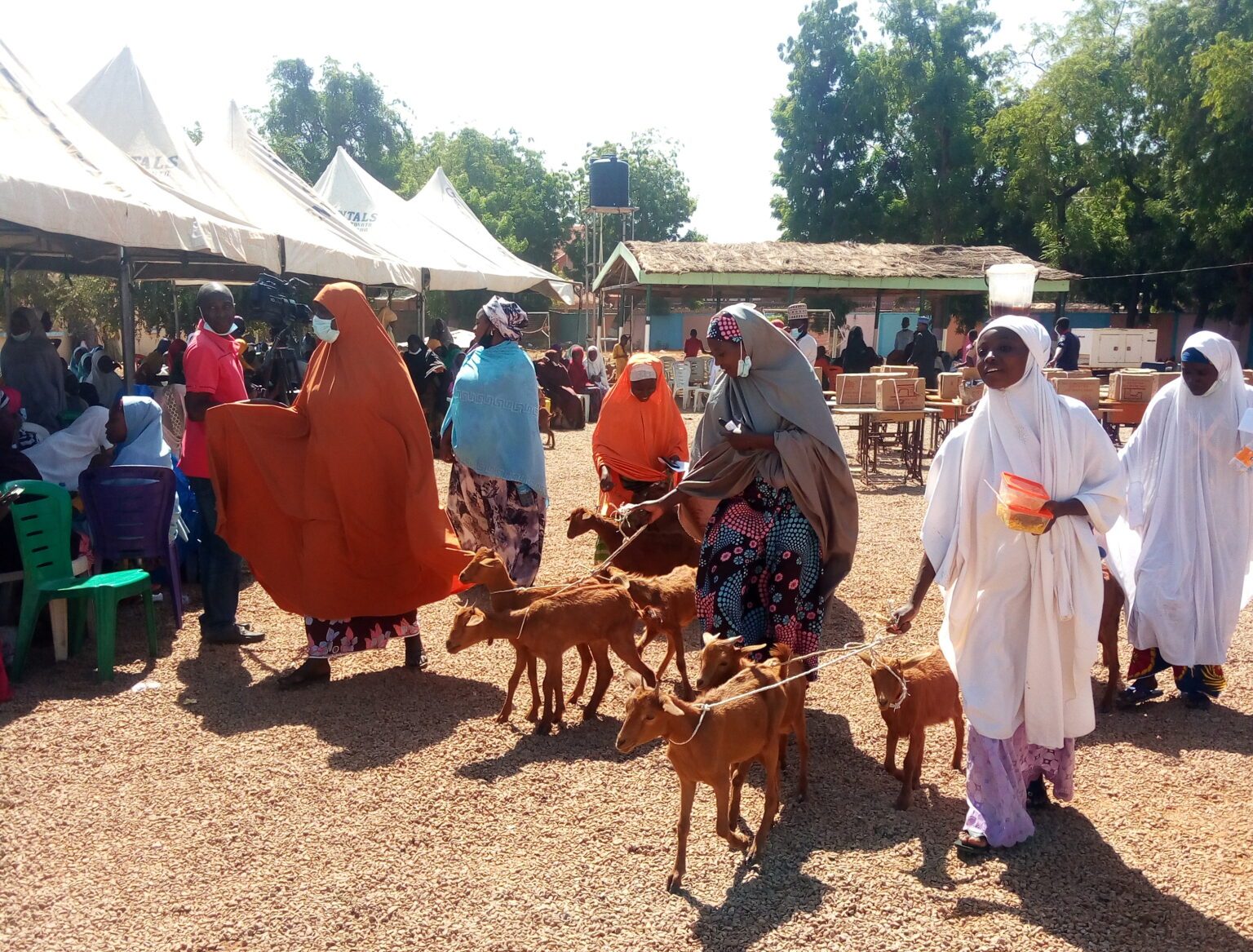 Some of the beneficiaries of the EU-UN Spotlight Iniative in Sokoto state. Photo: NAN

The EU-UN Spotlight Initiative Project in Sokoto State, on Saturday, provided working tools to 200 survivors of Gender-Based Violence (GBV) and Vesico Vaginal Fistula (VVF), to enable them to start their own businesses.

Items that were distributed included 50 sewing machines, 50 grinding machines, along with 300 Goats, sourced under a $40,000 grant.

At the end of a five-day skills acquisition for livelihood training conducted by the Sokoto State Ministry of Women and Children Affairs, in collaboration with Nagarta Community Health and Gender Education Initiative, the items were distributed.

Speaking at the occasion, Hajiya Kulu Sifawai, the Commissioner for Women Affairs, said that the participants were trained in entrepreneurship, animal husbandry and fashion, among other skills.

She explained that the empowerment and support packages are given to the women after the training, were meant to boost their morale to start new lives.

According to her, the ministry also engaged in counselling, guidance and other women enhancement programmes, to improve on their psychology, due to the trauma they suffered during surgeries.

Alhaji Mainasara Ahmad, Commissioner of Budget and Economic Planning, who was represented by Deputy Director, International Cooperation, Alhaji Musa Wamakko, commended the Initiative, as it would go a long way in improving the lives of the beneficiaries.

Ahmad congratulated the beneficiaries and urged them to live up to expectations by not reselling the items, disclosing that a monitoring committee would be constituted to monitor the judicious use of the items.

He further commended the Ministry for Women Affairs and the EU-UN Spotlight Initiative for their efforts.

Dr Bello Lawal, Chief Medical Director, Maryam Abacha Women and Children Hospital, described the support of the EU-UN Spotlight Initiative as commendable, especially for sponsoring VVF surgeries for some women in the hospital.

According to him, the support would surely enhance the reintegration of VVF victims into society, where they would become role models in providing support to other women and families. He urged them to encourage others with VVF problems to come for treatment.

In a goodwill message, Mr Umar Idris, the UNFPA Project Support Officer for Spotlight Initiative in Sokoto, said that the beneficiaries were expected to invest properly, hoping that in future programmes, livestock could be sourced from the present beneficiaries to distribute to another set.

He stressed that the project aimed at ‘’restoring dignity and reintegrating survivors into their communities with full confidence and livelihood skills to prevent VAWG, SGBV, HP, SRHR and VVF.”

One of the training facilitators, Abdullahi Mainasara, said poverty was responsible for increased cases of Gender-based Violence (GBV) and called for teamwork to address the menace.

Mainasara, Coordinator of Nagarta, explained that Nagarta and other NGOs always strove to sensitise people against all forms of violence in communities across Sokoto state.