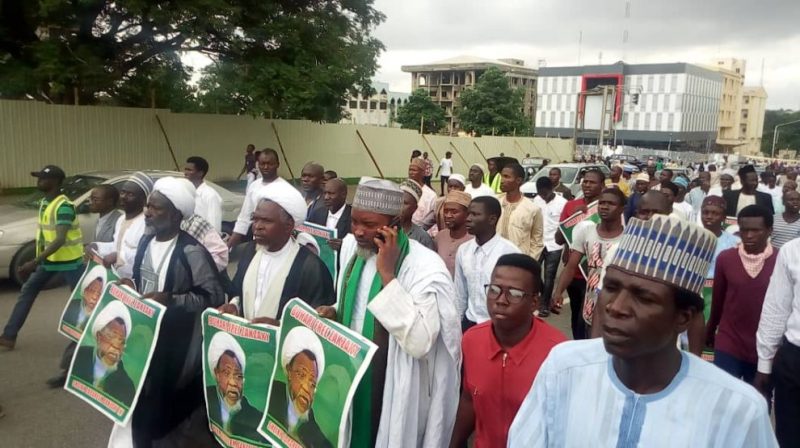 IMN reminds ICC of Zaria massacre. Above Shiites in a demonstration

Islamic Movement of Nigeria (IMN) has reminded the International Criminal Court (ICC) not to forget the Zaria massacre, five years ago in which over a thousand Shiites were killed by the Nigerian military.

It also reminded the body of the detention of its leader Sheikh Ibrahim El-ZakZaky, when his house was attacked.

The IMN marks the anniversary of what it called the Zaria Genocidal Memorial between 12 and 14 December.

Today is the fifth anniversary of the attacks.

Ibrahim Musa, President Media Forum of the Movement spoke today amid reports that ICC prosecutor Fatou Bensouda, has established in a preliminary report, that there are sufficient reasons to institute a full probe on the human rights crimes of Nigeria’s security agencies.

IMN called for the prosecution of the military officers, such as General Oyebade, who led soldiers who committed the massacre of over 1000 people in Zaria.

It said even the commission of inquiry set up by the Kaduna government recommended that this should be done.

“Years after, none of these Army officers has been arrested for these heinous crimes and atrocities, ” IMN stated.

“As we mark the fifth anniversary of this Zaria Genocide Memorial, we unequivocally reiterate that enough of this systematic oppression of Sheikh Zakzaky and members of the Islamic Movement.

“We call for the immediate and unconditional release of the Sheikh from this unjustifiable detention, along with those still in detention on this account,” according to the statement.

The days 12-14th December 2020 mark the fifth anniversary of the Zaria Massacre. On days like those, Sheikh Ibraheem Zakzaky, the leader of the Islamic Movement in Nigeria and thousands of his followers faced the most brutal crackdown ever, spearheaded by the Nigerian Army, at the behest of the Buhari-led Nigerian regime and its foreign backers. In those forty-eight hours of that eventful weekend, over a thousand unarmed Nigerian citizens were extra judicially gunned down in cold blood and many hundred others were arrested.

It was in those two cruel days that many infants and babies that knew nothing about the crimes their parents were allegedly accused of were mercilessly killed. It was during that black period too that even the elderly were not spared. The seventy-year-old elder sister of Sheikh Zakzaky was gruesomely thrown in a raging blaze while still alive, as she cried for water to quench her thirst. It was during that period that many families were completely wiped out of existence. It was during that period that not less than 193 children were butchered without any pity. Over 297 women, 548 men and 23 pregnant women were all killed within those two eventful days in December 2015. Valuable properties worth millions of Naira were torched and vandalized.

Within those terrifying days, graves of martyrs, earlier killed by the same Nigerian Army extra judicially, were desecrated and bodies were exhumed. In those same petrifying days, they secretly buried their victims in mass graves at a location several kilometres away from the crime scene. It was during those days that worship and educational centres, graveyard and the residence of Sheikh Ibraheem Zakzaky were razed and completely demolished.

Earlier, the lopsided Commission they instituted to cover their tracks, could not entirely cover up the gravity of these crimes. The Commission had observed the highhandedness of the military, which was not in consonance with their rules of engagement or any known international best practices, and therefore had recommended the trial of the General Officer Commanding (GOC) of the Army’s 1st Division Kaduna, Gen. Oyebade, who led the operation and all other officers who participated in the operation, “before a court of competent jurisdiction.” Years after, none of these Army officers has been arrested for these heinous crimes and atrocities.

In the meantime, five years on, the government has never been able to prove any of their allegations against Sheikh Zakzaky or any of his supporters in any court of law. The Sheikh has remained unlawfully detained in spite of a judgement by an Abuja Federal High Court that his continued detention is a breach of the constitution and his fundamental rights, and indeed all known laws. For most of his years in detention since then, Sheikh Zakzaky has been held virtually incommunicado with only limited access to his legal representation. He was apparently poisoned in detention and is being denied medical treatment, putting his life at very great risk.

This oppressive Buhari regime has also since gone ahead to escalate their tyranny against members of the Islamic Movement, further killing many hundreds and arresting and detaining equally many hundreds more. The rights of Sheikh Zakzaky and his supporters are continually being violated with impunity. We, therefore, call on the International community, especially the International Criminal Court (ICC) at The Hague and the UN to expedite action to hold the Nigerian government accountable for its crimes, and help uphold the inviolable human rights of the people of Nigeria.

Finally, as we mark the fifth anniversary of this Zaria Genocide Memorial, we unequivocally reiterate that enough of this systematic oppression of Sheikh Zakzaky and members of the Islamic Movement. We call for the immediate and unconditional release of the Sheikh from this unjustifiable detention, along with those still in detention on this account. We also demand the immediate arrest and prosecution of all the culprits involved in the Zaria genocide of December 2015 and its aftermath.