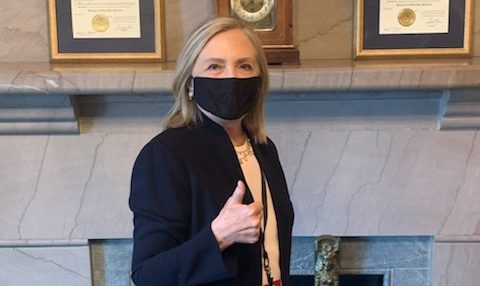 Former U.S. First Lady and Secretary of State, Hillary Clinton, on Monday renewed her call for the abolition of the country’s Electoral College.

She made the call in a tweet shortly after voting as an elector alongside her husband and former President Bill Clinton in New York.

“I believe we should abolish the Electoral College and select our president by the winner of the popular vote, same as every other office.

“But while it still exists, I was proud to cast my vote in New York for Joe Biden and Kamala Harris,” the tweet reads.

Hilary lost the 2016 presidential election to Donald Trump in spite of winning the popular votes.

Trump was elected after securing 304 electoral vote to Clinton’s 234.

The Clintons were joined by Gov. Andrew Cuomo alongside 26 other electors on Monday who formerly sealed Biden’s victory in the Nov. 3 election in New York.

The U.S. Electoral College is a group of 538 presidential electors who converge in state capitals every December of an election year to ratify the election of the President and the Vice President.

This the college does on 14 December every four years.

The number of electors in each state is equivalent to the number of seats in state’s legislature.

A candidate requires an absolute majority of 270 electoral votes to win the election.

But if no candidate secures the 270 votes, Congress holds a contingent election to pick the president and Vice President.

Biden’s election is expected to be ratified in the Electoral College held in all state capitals on Monday following the Nov. 3 general polls.

Trump, however, has not conceded as he continues to contest the election results.