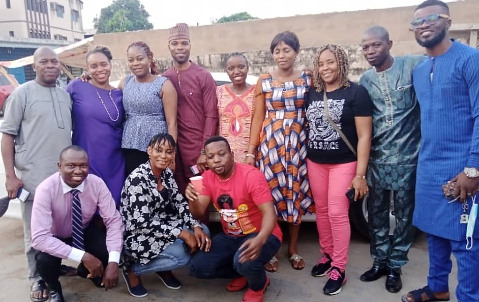 Attendees in a group photograph

Members of 2011 Part-time set of Mass Communication Department, Lagos, State Polytechnic, (LASPOTECH) on Sunday, held its first meeting, ever since they graduated from the institution.

The meeting was held at the residence of Mrs Folayemi Isichei, the Set’s Head of Class (HOC), Okota, Lagos.

It started with praise and worship, which was led by Mrs Lucy Jacob, while Mr Abiodun Adebanjo said the opening prayer and Mr Niyi Zaccheaus Odumoyo, the anchor of the event.

Welcoming members to the maiden reunion, Mrs Isichei appreciated all members for their efforts and zeal in ensuring that the event held, despite the short notice.

Folayemi charged them to always be their brother’s keepers and to ensure that the set becomes a pacesetter in the history of the institution’s Mass Communication department.

Also, both Mr Sanusi Oladipupo Paul and Madam Georgeanna Segbeji, encouraged the gathering to be determined, courageous, understanding and love each other.

During the meeting, those attended discussed on how to raise exco for the position of President/Chairman, two Vice Presidents, General Secretary, Financial Secretary and Social Director for the group.

While Diamond Afegbua and Abiodun Adebanjo were nominated as coordinators to the WhatsApp platform for the voting into the listed post.

Members were also encouraged to always use the WhatsApp platform for informative, educative information and an avenue to assist members.

The meeting came to an end with closing prayers from Mrs Hellen Melbourne and Idris Afegbua.