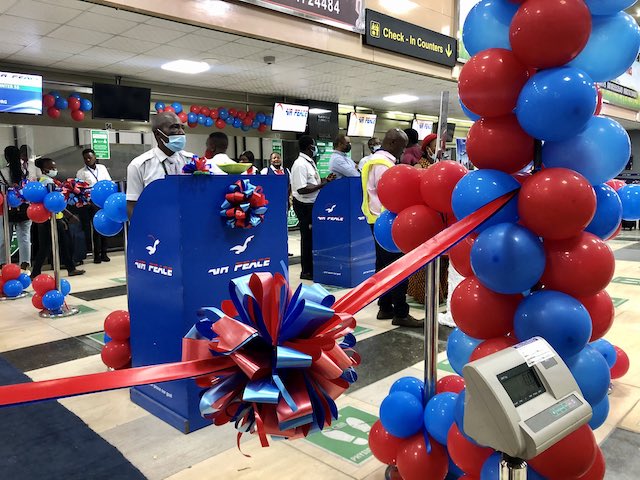 The airline said it will operate two flights weekly between the two cities. Flights will depart Joburg for Lagos on Thursday and Sunday for the six hour journey.

Allen Onyema, chairman of the airline said at a brief ceremony at the Murtala Muhmmed International Airport, Lagos that Nigeria airlines are capable of breaking barriers only if given the enabling environment to operate.

Onyema said Nigerians will now heave a sigh of relief as they now have a choice of direct flight to South Africa.

In Johannesburg, the inaugural flight was celebrated with a dinner, at which Mr Ezenwa Nwaobiala, Consulate General of Nigeria, said the launch of the flights will deepen the relationship between Nigeria and South Africa.

He said that the venture will also strengthen the implementation of the bilateral agreement between both countries.

In her remarks, Mrs Oluwatoyin Olajide, Chief Operating Officer, Air Peace, pledged to work harmoniously with all the stakeholders to ensure the new route is successfully serviced.

According to her, the decision to extend to Johannesburg is consequent upon the airline’s vision to create affordable and safe air travel for Africans.

“Our commitment to excellence and determination to reduce the air travel burden of Africans by employing dynamics that are peculiar to the African people, has proudly earned us the title of the biggest airline in West and Central Africa.

“It is this same excellence and determination that we’re bringing to South Africans.

” The airline has recorded a lot of milestones in less than a decade and now services sixteen domestic routes, five regional routes and two international destinations, including the United Arab Emirates, which we launched in July 2019.

“I am pleased to also inform you that we have other international routes in the offing, such as Houston-U.S., Mumbai-India, Guangzhou-China and London.

Mr Mohammed Danjuma, a Board Member of Air Peace, commended Nigerians in South Africa for the warm welcome given to Air Peace inaugural flight.

He promised that the routes would be adequately explored.

According to Danjuma, the direct flights from Nigeria to Johannesburg will reduce the stress of going round the world to get to South Africa.