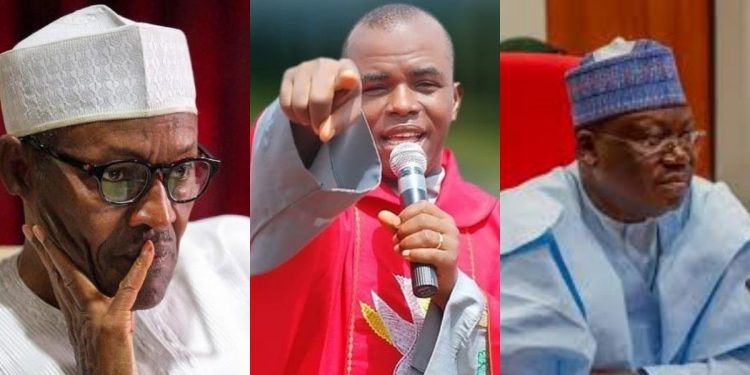 The Spiritual Director of Adoration Ministries, Enugu, Nigeria (AMEN), Rev Fr Ejike Mbaka has dropped New Year bombshell, warning President Muhammadu Buhari to change his policies and take care of the youths or they would rise and end the government of the day.

He also said that God’s anger is coming upon Nigerian legislators because they are the real kidnappers.

Mbaka spoke at the 2020 edition of his annual December 31 Crossover Night ministration.

According to him, the Holy Spirit of God asked him to warn the government of the day to be very careful; to change policies and take care of the youths without politicising their condition.

He said the government should rise and urgently create jobs and innovate opportunities that would benefit the youths of the nation because they have suffered so much, warning, “don’t politicise the condition of the youths, otherwise, they will arise and end the political system.

Mbaka stated that he could see a year ahead, but that it is not specific whether it is in 2021 that this would happen, but that “it is within a time in the time of life, that the anger of God will befall many people in the political circle because they have looted so much and disgraced this nation enough.”

According to the Nation, Mbaka said those who should be serving the country have looted the country dry for their personal aggrandisement, such that the nation’s children and grandchildren no longer have a future.

According to him, politicians have been packing the nation’s commonwealth, refusing to create wealth, but that they now turned around to tag the youths kidnappers, criminals, hoodlums and so on.

He said they should obey the voice of God, sit together and think out how to reshape Nigeria, warning that the situation in the country portended wickedness, wicked ruling in high places, “in the name of legislators; they are the real kidnappers, and the anger of God is upon them.”

“I know they would want to attack this message, as usual, but I warn, let nobody, whether you are a politician or a man of God, attacks this message so you do not become a victim!

“Whoever that would conspire against this message or partake in any gang-up against me or this ministry, your evil plans will turn back and befall you,” he warned.

He warned that he is no longer the Fr Mbaka of 2020 but that of 2021, saying that it would be fire for fire this year, adding that “if you attack us, you will be attacked.”