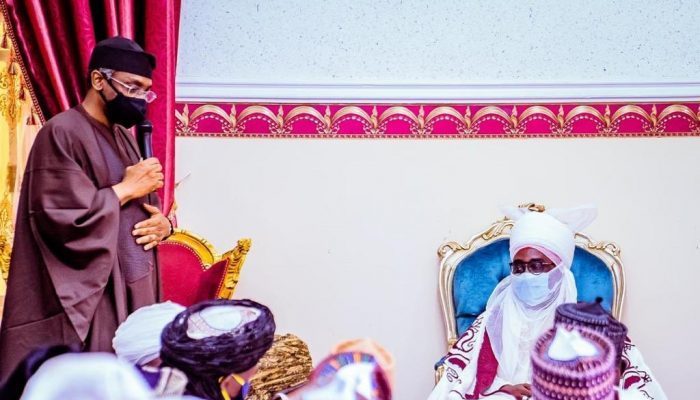 Hon. Femi Gbajabiamila, the speaker of the House of Representative earlier on Saturday paid a condolence visit to the Emir of Zazzau, Alhaji Nuhu Ahmed Bamalli over the death of two prominent princes in the emirate.

The speaker visited the monarch alongside a delegation of over 20 members of the House. Gbajabiamila sympathized with the Emirate Council and the immediate families of the deceased.

The speaker also prayed that God grant the souls of the late princes’ eternal rest.

Gbajabiamila during the visit also congratulated Bamalli over his elevation to the throne. He noted that even though he was absent at the ceremony in person, he was there with his soul.

“I was here with my heart, with my soul. The only thing that was not here on that day was my body, he said.

The Speaker thanked the royal father for his support for the House of Representatives, particularly the 9th Assembly.

The emir in response thanked the speaker for the visit. Bamali said that the entire emirate was in shock over the death of the two princes, though they submitted to the will of God.