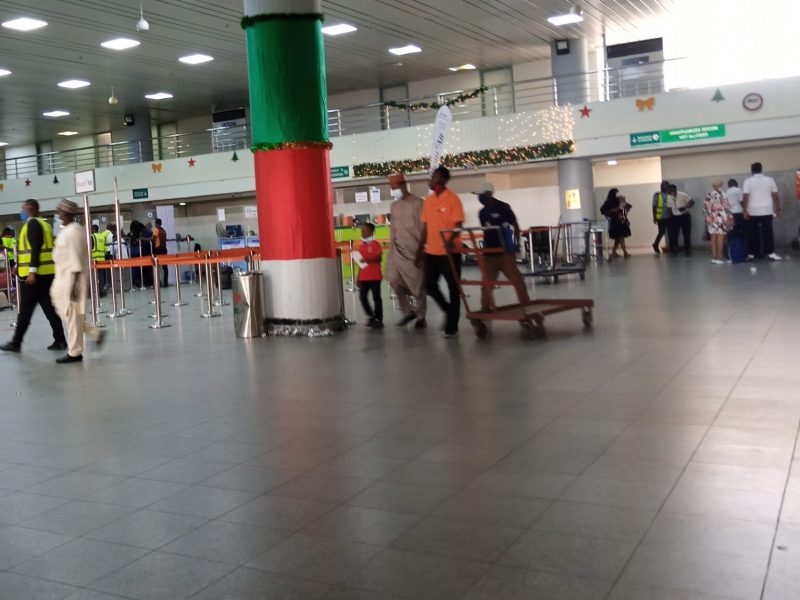 Officials of some airlines on Tuesday said the Nnamdi Azikiwe International Airport, Abuja, received a surge of in-bound passengers since Jan. 2.

The officials made this known in separate interviews in Abuja.

More travellers are observed coming into Abuja from other destinations while outbound passengers are very few at the booking and check-in counters of most of the airlines.

Staff, who spoke, said the continuous increase of in-bound passengers was as a result of returning passengers that travelled out of Abuja for Christmas and new year celebrations.

According to him, Max Air outbound flights have dropped below 50 per cent while the inbound flights are full due to passengers returning from the yuletide season celebrations.

Ogunyale said that passengers traffic could get lower towards the middle of January as few individuals would likely travel for personal dealings.

“After the yuletide season, we are gradually moving into the low season traffic. Low season because at this time of the year not many people will be travelling out of Abuja.

“They will not be travelling because they have just come back from holiday. They just came back from visiting families and friends. Traffic will be at the minimal level,” he said.

The station manager also pointed out that relying on the national budget by many companies to form their own 2021 budgets would further contribute to passengers’ low traffic in January.

“From the economic and financial point of view, a lot of the companies too are waiting to see the budget so that they can form their own budgets or fashion their own budget out of the national budget.

“In fashioning out their own budgets, there is going to be vital plans to know how many of the staff will be able to travel for projects and assignments out of Abuja in the new year,” he said.

He further said the inbound flights from all routes into Abuja were full since Jan. 2 while the outbound flights were very scanty.

“Last month, a lot of people rushed home to meet the deadline for Christmas. So, there was a lot of rush and demand from passengers.

“We managed to cope with their demands. Sometimes, we operated up to midnight and to the early hours of the next day.

“But now, people are coming back. There is no specific time. Everybody picks his or her own time of coming back. The rush is no longer there but passengers are actually there,” he said.

“Going out of Abuja is still okay, between N35,000 and N60,000 to all the destinations- Sokoto, Kano, Lagos and Port-Harcourt, among others.

“In-bound is still high now because, people are coming back to resume work with some other reasons,” he said.

Jibreel urged the Federal Government to improve infrastructure and business opportunities at the airport to boost aviation sector.

According to him, if the budget is not vibrant enough to provide opportunities, infrastructure among others, it will limit development in the sector.

Many passengers that spoke to NAN said that ticket charges were relatively cheap now (in January) compared with their experiences in December.

They commended efforts made by the Federal Airports Authority of Nigeria to sustain and ensure every stakeholder in the airport adhered to COVD-19 protocols.