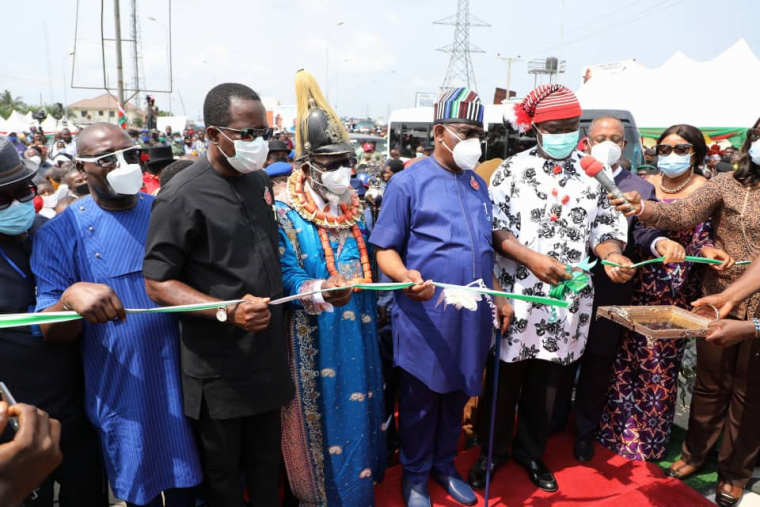 Former Deputy Senate President, Senator Ike Ekweremadu, has said President Muhammadu Buhari should not shy away from seeking help from foreign countries to tackle the problems of insecurity bedeviling the country.

According to him, the federal government should explore the possibility of getting assistance from foreign countries that have such capacity in order to protect the sovereignty of the country,  its people and democracy.

“Today,  we are challenged as a country in terms of security. Out of sheer national pride, we have not been able to accept help and assistance from those who know better, who can help us to secure this country,” Ekweremadu said.

He also noted by executing projects in the hinterland land other than the city, the  Wike administration has demonstrated equity and justice to Rivers people.

According to him, the lessons to be learnt from the series of project inauguration in Rivers State by governors and other political leaders, should be for them to get inspired and replicate such development in their various States and at the national level.

“This is an opportunity for me to call on our leaders, just like I am saying that other States should learn from Rivers State, we in Nigeria must also accept assistance from other countries in order to secure our borders, secure our democracy, secure our place and secure the citizens of this country. That is the only way to go. We must learn from those who have done better than us.

“I believe it when I said that we should not be ashamed to say we are learning from our colleague on what to do.  If we need help, we must seek help from whoever we can get help from and that’s the only way we can develop.”

Speaking earlier, Governor Wike said the non-stop inauguration of completed projects in the State has silenced his critics, and members of the opposition party,  the All Progressives Congress (APC).

The governor said instead of the opposition to address how they can encourage their APC governors to roll out projects for inauguration as done by PDP governors,  they are hiding under the guise of speaking for local contracting firms.

He described  allegation that his administration has refused to empower local contracting firms to handle project construction as sheer falsehood.

Governor Wike said some of the projects that have been inaugurated this week like the Semi-Nonwa -Kira Road was handled by Rivers construction firm, Lubrik Construction company, while the Abonnema Ring road was done by O.K Isokariari Construction Company.

According to him, his administration is mindful of empowering Rivers people, encouraging and trusting them to handle some critical projects because he believes in their capacity.

“Members of the All Progressives Congress (APC) have said I should mention those whom, locally, we have empowered. OK Isokariari Company is a Rivers Company. They did Phase One of Okochiri Road.  They have also done this Abonnema Ring Road.

“Lubrik Construction Company Ltd is a local company too.  As we go on, we will begin to mention them. Our own is not to develop others without developing our own people. I’m happy with the contractor.  We will continue to engage you so that you’ll employ Rivers sons and daughters.

“You see how we have silenced them in the state. We commissioned projects until the 24th of December 202 . We have started this year since 4th January 2021. Let them tell their people to roll out their projects and call people.”

The governor said the PDP is  different from APC because it always keeps its promises to the people, deliver good governance and quality projects that satisfy the yearnings of the people.

“For us, as a party and government,  whatever promises we make we must fulfil them. We are not a party that promises and fail or gives excuses.

“We are a party that when we make a promise,  we must fulfill the promise because we owe it to the people. That is why I have told our people, we have no choice, that the only hope this country has today is the Peoples Democratic Party (PDP).”

Governor Wike said it is not the length of the ring road that matters but it’s importance to the people. He stated that the ring road now serves as an alternative route in and out of Abonnema and Obonoma towns.

He announced that the adjoining mangrove will be dredged to provide land to the people of Abonnema and Obonoma that they can use for future development.

“Having done this, the next thing for us to do is sand-filling so that they can have land to build on. I know how important land is to them.

“I therefore direct the Special Adviser on Special Projects to meet with the Secretary to the State Government (SSG) to make sure we award a contract  of sand-filling of Abonnema-Obonoma areas.”

The Commissioner of Works, Elloka Tasie-Amadi said prior to the construction of the phase two of the Ring road, there was only one entry route into Abonnema.

He explained that the phase of the project which was initiated by Governor Wike administration now serves as alternate route.