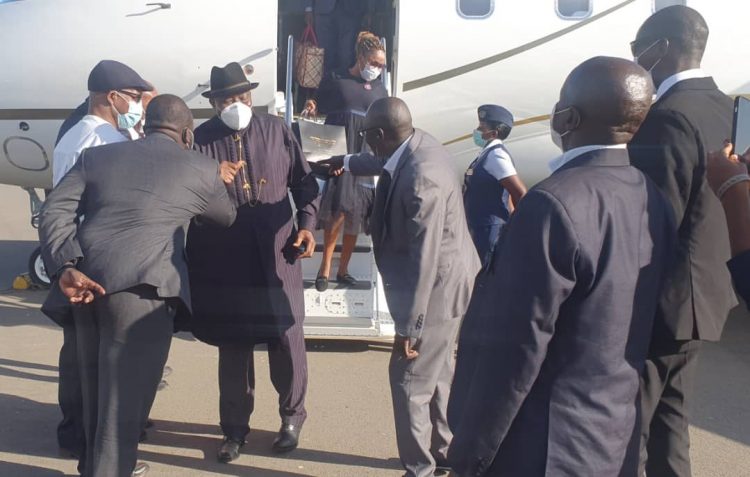 Former President, Dr. Goodluck Jonathan arrived in Banjul Thursday evening to continue to support the process of building national consensus and backing for the ongoing constitutional review process in The Gambia.

Jonathan is returning to the country two weeks after he visited Banjul to facilitate the consultations for advancing the inter-party dialogue meant to garner the required support for a draft constitution currently being reviewed by the Gambian parliament.

The former Nigerian President’s invitation to The Gambia as a well-respected international statesman came as a result of broad consultations among different stakeholders in the country.

During his visit last December, he was said to have made reasonable progress in his bid to get the political parties to reconcile their differences and give the draft constitution a fresh chance of being passed by the parliament.

The ongoing Gambian transition involves the drafting of a new constitution which has to be passed by the National Assembly before being submitted to a national referendum.

According to the Gambian authorities, the former President was invited as the eminent person to facilitate the process of the dialogue because of his neutrality and proven record in democratic and constitutional reforms.

Dr. Jonathan is being supported by the leaders of the intergovernmental International Institute for Democracy and Electoral Assistance (International IDEA) who have been designated by the Gambian authorities to provide secretarial and logistics assistance to the former President, in the course of the mission.