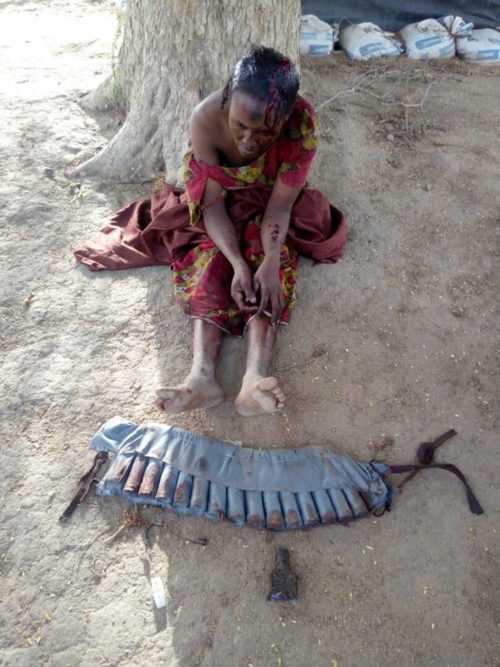 A Boko Haram female suicide bomber after her arrest

Thirteen civilians, eight of them children, died Friday when a suicide bomber blew herself up in a Boko Haram attack on a village.

It was the third Boko Haram attack this month in the region.

It was also a signal to neighbours Nigeria and Niger that the terrorists may have recruited new set of suicide bombers and ready to unleash them.

The terrorists have not deployed suicide bombers to attack their enemies in a long while.

Mahamat Chetima Abba, the traditional chief, or Lamido, in the village of Mozogo, told AFP the attackers arrived in the middle of the night, shouting “Allah Akbar” (“God is greatest”) and brandishing machetes.

The panicked villagers tried to run off into the nearby forest, and in the stampede the suicide bomber detonated her device, he said.

The account was confirmed by a member of the local defence committee, who said his group had tried to repel the attack.

“Thirteen civilians died, two of them children aged four and five as well as six teenagers,” a regional police officer told AFP by phone, speaking on condition of anonymity.

The Lamido confirmed the number, saying that a woman and her three children were among the dead.

Both attributed the attack to Boko Haram.

The police source said that in addition to the suicide bomber, the other fatality among the attackers was a man who was killed by the self-defence force.

“However, it seems that they no longer have the means to carry out mass attacks using guns,” he said, noting that the assailants had carried machetes.

“They are using home-made bombs more and more,” he said.

On Monday, three members of a self-defence force in the nearby village of Kaliari were killed.

More than 36,000 people have been killed, most of them in Nigeria, and three million people have fled their homes since Boko Haram launched its insurrection in northeastern Nigeria in 2009.

Boko Haram and a splinter group called the Islamic State in West Africa Province (ISWAP) have stepped up attacks in recent years in Nigeria and neighbouring Niger, Chad and Cameroon.

Niger is also being hit by jihadists crossing from Mali.

An attack on two villages in the western Niger region of Tillaberi on Saturday left 105 dead, the highest civilian toll in the Sahel since the jihadist insurgency began in the region in 2012