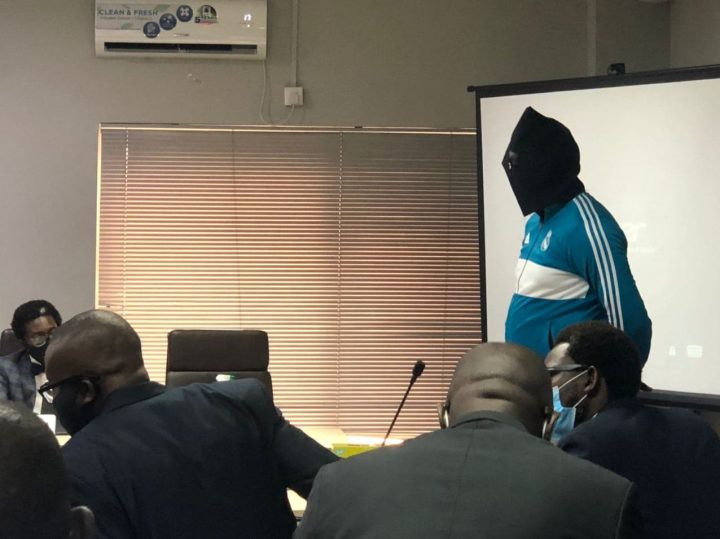 A repentant cultist (name withheld) appeared in a mask before the Lagos Judicial panel to testify against claims that Eni Idum was killed by officers of the scrapped Federal Special Anti Robbery Squad (FSARS).

He narrated that he was arrested in July 2019, three years after he renounced cultism. Upon his arrest for being an ex-cultist, he agreed to work with SARS officials to arrest other cult members.

The witness said on 15th, July 2019, he led the SARS official to Fadeyi alongside three other officers lead by Inspector Hakeem aka Skoda, to nab the cultists but the operation was foiled as the gang members saw them coming.

He said afterward, he and the SARS officers went to Ajisegiri street, Yaba where he described as a base for cultists in Lagos State.

The witness said on getting to Ajisegiri street, there was a large crowd as cult group Eiye and Aiye were fighting.

He said the police went back to reinforce and that he was locked in his cell.

The repentant cultist told the panel that minutes after, he was taken to Ikeja Police Command where he was questioned if any officer shot at Ajisegiri street, and he answered ‘no.’

He told the panel that three weeks after, he was taken to CID Panti again and was asked by the head of the station if any police shot at Ajisegiri and he answered ‘no.’

The repentant cultist said he appeared before a magistrate three months after his arrest and he got remanded in prison. He said he is still on bail as his trial is still on.

Elder Kayode Omotosho a church member to late Eni Idum told the panel the victim was killed by Hakeem Skoda, a SARS officers at Ajisegiri street.

The case was adjourned by Justice Doris Okuwobui to 5th February, 2021 for adoption.