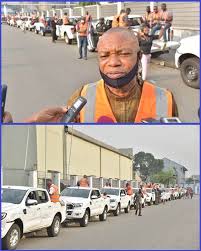 Above is Chairman, DSP Felix Nwadide of the Rivers State Taskforce on Street Trading and illegal Motor Parks and below is a cross section of vehicles

Eleven operatives of the newly formed Rivers Taskforce on Illegal Trading and Motor Parks were sacked on Thursday for collecting bribes from members of the public around Choba area in Obio-Akpor local Government area of the State.

Coordinator of the Taskforce, DSP Felix Nwadibe (retired) who disclosed this in Port Harcourt said they were sacked based on reports and verifiable evidences of misconduct, despite several warnings before the commencement of the new exercise.

He also said the sacking would serve as a deterrent to other members of the taskforce who want to indulge in such act.

He expressed satisfaction at the level of performance of the taskforce members so far, pointing to the level of achievements so far recorded on the free flow of traffic on the roads in Port Harcourt

DSP Nwadibe further called on the general public to report any member of the taskforce to the authority if found wanting.

It would be recalled that Governor Nyesom Wike disbanded the previous task force headed by Bright Amaehule based on public outcry over allegations of extortion, abuse of human rights and alleged killing of innocent members due to high-handedness of the operatives.