How Fani-Kayode gambled on Trump and failed with him 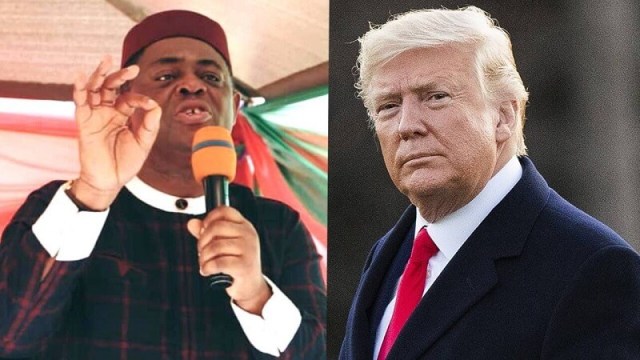 All through the election period and even when Joe Biden was declared winner of the poll, Fani-Kayode was undaunted, he believed that God would do a miracle and overturn a poll many declared free and fair.

On the day of the US election, Fani-Kayode tweeted: “The God of Abraham, Isaac and Jacob is with you (Trump). The Holy One of Israel is your strength. He is a man of war and He is irresistible in battle. He is your shield, your glory and the lifter if your head! He will show Himself mighty today! Congratulations in advance!”

He continued prophesying like Saul, “We are with you and God is with you.”

To the Supreme Court! pic.twitter.com/fXbzgWXXw9

On November 7, 2020, in the heat of Trump’s ranting that he easily won the election, Fani-Kayode, in series of tweets said “You can scream that Joe Biden has won as much as you like. You can laugh at Trump & insult & mock those of us that supported him. You can believe the fake news in the major news networks and accept their narrative that the American presidential election was free and fair.

“The history of democracy & that it will be exposed for what it is at the American Supreme Court. This is my view & if you like you can insult & mock me for it. Time will tell if I am right or wrong. Biden represents evil to me for the following three reasons. 1. He believes in abortion. 2 He believes in same-sex marriage. 3. He seeks to persecute Israel. Love him all you like but I choose to despise him because I consider these three things to be evil, ungodly and against core Christian values

“Cheer him on & clap for him as much as you choose but I still do not believe that he will ever be sworn in as President. Even if he makes the magic 270 electoral college votes & people call him the “President-elect” it will still be challenged in court & his so-called “victory” will remain subject to the ruling of the Supreme Court & conditional upon its final decision. Until that ruling & decision has been made & announced I would suggest that those who are already dancing in the streets & celebrating Biden’s so-called victory should calm down, have a reality check, smell the coffee, get a grip of themselves and keep the champagne in the fridge. This matter is not over and we still have a long way to go. It is not just a fight for the heart and soul of America but also the destiny of the world.

“It concerns us ALL and affects us ALL even though we are not Americans. I thank God for His grace, mercy and power and for imbuing Donald Trump with faith, courage and strength. These virtues will serve him well in the next few days, weeks and months. In the end he will be vindicated and he will prevail and those behind this evil conspiracy will know that we serve a mighty God who rules in the affairs of men!”

Fani-Kayode went on to say that the media (CNN and others) could not decide who won an election.

Making a reference to the crucifixion of Jesus Christ, the Nigerian critic wrote: “Even Satan thought he won… until 3 days later. Meaning Jesus resurrected after three days after he was crucified. It does NOT mean something will happen to Biden after 3 days. Sometimes I wonder how dumb some people can be. Point is as follows: even though u have already buried Trump by Jan. 20th we shall see who is sworn in.

“CNN just acknowledged that Trump won the largest vote in American history for a loosing candidate. Are they getting worried? We will talk again after the Supreme Court rules on this matter! It is at that point that we will know who will be sworn in as President on Jan. 20th.”

"The blue wave has reached its peak. The red shall rise & overwhelm it. Biden's dream shall be dashed & his celebrations shortlived.Trump shall do a 2nd term & the name of the Lord shall be glorified"-@realffk

BEFORE YOU POP THE CHAMPAGNE
https://t.co/LEwl8ljs1U

Fani-Kayode also joined American televangelist, Kenneth Copeland in laughing at Biden’s victory, believing that Trump would have his way.

Televangelist Kenneth Copeland laughs at the media for declaring that Joe Biden has won the election.pic.twitter.com/KETkR9D6aH

Fani-Kayode continue in his hallucination until January 6, 2021. To him, the day would be one in which Biden and his vice, Kamala Harris would be exposed. “It is the day on which Joe Biden, Kamalla Harris & the Democratic Party can finally be exposed for the fraudsters, liars, cheats and scammers that they are. It is the day on which China and its surrogates and puppets can finally be exposed and put to shame and on which the dark satanic forces that its leaders represent can be utterly humiliated & frustrated. It is the day in which American patriots can & must prevail against the traitors, foreign agents & spies in their midst….,” he said.

After all the maneuvering of Trump to gain power through the back door, the Congress certified the victory of Biden. Even when the mob invaded the Capitol, Fani-Kayode called it the ‘people power.’

With the certification of Biden’s victory, it was then it dawned on Fani-Kayode that the game is over and that his idol, Trump has fallen. He became sober and knew after all that he was never among the prophets, but just being puffed up, and dragging God into a matter that should be left for the Americans to decide who rule them. He still believed the election was rigged even when he was not there. Fani-Kayode was made to eat his words, he and others joined Trump in his disgrace.