Injured soldiers: We’ll not give up until Boko Haram is defeated 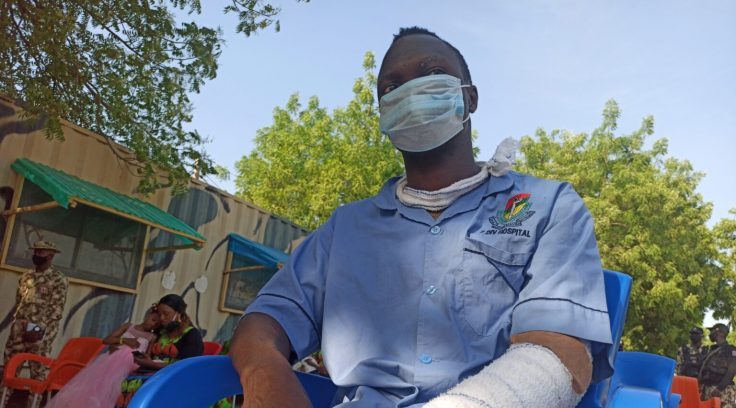 One of the injured soldiers

Some Nigeria soldiers wounded during various encounters with the Boko Haram insurgents in the North East have vowed to return to the battlefield until the insurgents are defeated.

The soldiers made the pledge when Sen. Ali Ndume (APC-Borno), Chairman Senate Committee on Army, paid a fact finding visit to the 7 Division Medical Services and Hospital in Maiduguri on Sunday.

Cpl. Abubakar Bukar, who received bullet wounds during an insurgents ambush on troops at Damboa Road in December 2020, said he was ready to return to battle field to join his colleagues to continue the fight.

“Well, I want to thank God to have survived the attack. But as a soldier, I am ever ready to go back to join my colleagues to continue fighting until we librate our country,” he said.

Another wounded soldier, Cpl. Kolawole Omosheye, said they were attacked by the insurgents in Tunkushe on Dec. 29, 2020.

Omosheye said while engaging the insurgents in a battle which lasted more than 20 minutes, he was hit by a stray bullet.

“I am feeling better and in the next two weeks, I will be giong back to my location. We thank God and the GOC who came with reinforcement to repel the attack.

Pte. Saidu Dahiru also recounted his near to death experience when the insurgents attacked his location with mortar bombs in Damasak in December 23, 2020.

“They attacked us with several guntrucks mounted with Anti Air Craft. While engaging the insurgents they unfortunately fired mortar bombs at us and the fragment hit me on my back.

“But now they removed the fragment and I am getting better and in the next two weeks, I will be going back to continue the fight,” he said.

Ademola Felix, who expressed the same feelings vowed to hit back at the insurgents when he returned to his base at Gamborun Ngala.

Felix said that he was wounded when their vehicles stepped on an Improvised Explosive Device, noting that his colleagues died in the incident.

“I will go back to my base to hit them back. I will hit them hard,” Felix said.

In his remarks, Ndume said that the visit was part of efforts to encourage the army personnels who were wounded while fighting in various theatres of operation in the North East.

He said that the decision also followed recent publications by some news media alleging that wounded troops were neglected.

Ndume said such news can demoralise the troops who are sacrificing their lives to save the country.

“We have visited all the wards in the hospital and the medical care provided to the personnel’s were commendable.

“When we came, we were told that those that required additional care have been evacuated to 44 Reference Hospital Kaduna which is one of the best medical facilities on this nation.

“This country belong to all of us, we have the moral duty to encourage our fighting troops and to support them with all that they needed to execute the counter insurgency campaign.

“I want to tell the patient and the officers that we are all Nigerian, don’t be discouraged or demoralised. Just continue with your work. This work you are doing is not just a national duty alone but it is a Godly duty.

“God will reward you for your sacrifices. The committee and the National assembly will continue to stand by you.”

Ndume also commended the GOC 7 Division, Maj.-Gen. Abdul Khalifa, for his commitment that has led to the successes recorded under his leadership.

“Your patriotism and commitment is what transcended down to your troops. May Allah continue to guide you and we could see the light at the end of the tunnel. Normally the end is the must difficult,” he said.

Khalifa pledged the Military leadership commitment towards the welfare of all officers and soldiers in the division.

“You have gone round and seen for yourself and you have also interacted with the wounded soldiers. We will continue doing our best to ensure that they are well taken care of,” he said.

Khalifa said that the troops had exhibited true spirit of professional soldiers and made great impact in the defence of the country.