Just In: Sowore, others granted bail 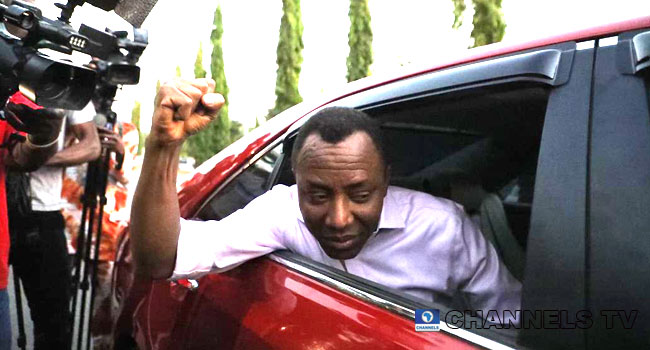 Nigerian activist, former presidential candidate, and Sahara Reporters’ publisher, Omoyele Sowore had been granted bail by a Chief Magistrate Court sitting in Abuja in the sum of N20m.

Four other activists, who were arrested with Sowore on New Year’s Eve in Abuja for holding a protest against bad governance, were also granted bail in the sum of N1m each.

Sowore and others are all standing trial for alleged unlawful assembly, criminal conspiracy, and inciting public disturbance.

The convener of the #RevolutionNow campaign was arrested in the company of other activists during a protest against the Nigerian government in the early hours of Friday, January 1, 2021.

Chief Magistrate Mabel Segun-Bello while ruling on the bail application on Monday filed admitted Sowore to bail in the sum of N20million and two sureties in like sum.

One of his sureties must be a civil servant not below grade level 12.

The court also ordered Sowore to remain in Abuja and must physically report to the court registrar every Monday and Friday pending the hearing and determination of the case against him.

The judge, however, adjourned the case to February 5, for trial.