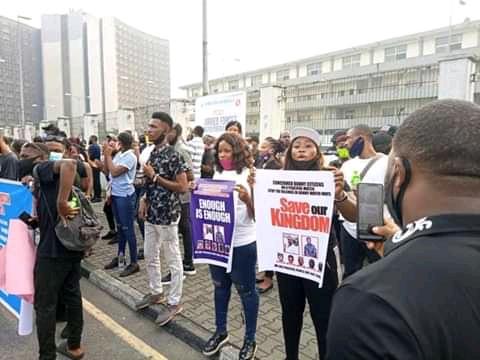 The protesters at Government's House Gate in Port Harcourt on Thursday

Scores of youths from Bonny Local Government Area on Thursday congregate at the gate leading to Rivers Government’s House in Port Harcourt in protest against incessant attacks on boat passengers by sea pirates on the waterways which joined their community to other parts of the State.

The youths have been carrying peaceful protests in  Bonny Island since Tuesday before they decided to come to Port Harcourt on Thursday.

They has also gone to the headquarters of Bonny Local Government where they lamented the killing of two young men recently killed by pirates on the waterways.

But they left disappointed as the council chairman and his officials refused to address them after spending the whole day at the gate of the Secretariat of the Council.

The youth said they are angry that both the federal and state government have not shown visible concern about their plight since the protest started.

Bonny, the host of multi-billion dollars Nigeria Liquefied Natural Gas, NLNG and other multinational oil companies can only be accessed by water.

The contract awarded by the federal government for construction of a road that will link the community with other parts of the state has suffered several setbacks due to inadequate funding.

Speaking to journalists in front of Government’s House gate in Port Harcourt, some of the youths vowed that they will not leave until Governor Wike addresses them on the concrete steps he will take to ensure adequate security on Bonny waterways.

One of them who simply gave his name as LongJohn Hart said they are grateful to the Governor over the recent commissioning of Bonny-Bille-Nembe Jetty.

But he  queried, “What happens to us  and our people along the insecure waterways when we take off from the Jetty to and fro Port Harcourt?”

Our correspondent observed that the protesters carried placards of varying # StopkillingofBonny people,”Gov. Wike life is biggest Project,” “Secure our Bonny waterways”, “We have lost too many lives,”, and others.

As at the time of filing this report, the peaceful protesters vowed that they will not leave untill they hear from the Governor.

However, in a bid  to fight insecurity in the state including on the waterways, the Governor Wike had launched ‘Operation Sting’ about a year ago and donated  gunboats and the over hundred patrol vehicles to security agencies. Despite this, insecurity has persisted on the waterways with frequent killing and robbing of passengers by pirates.