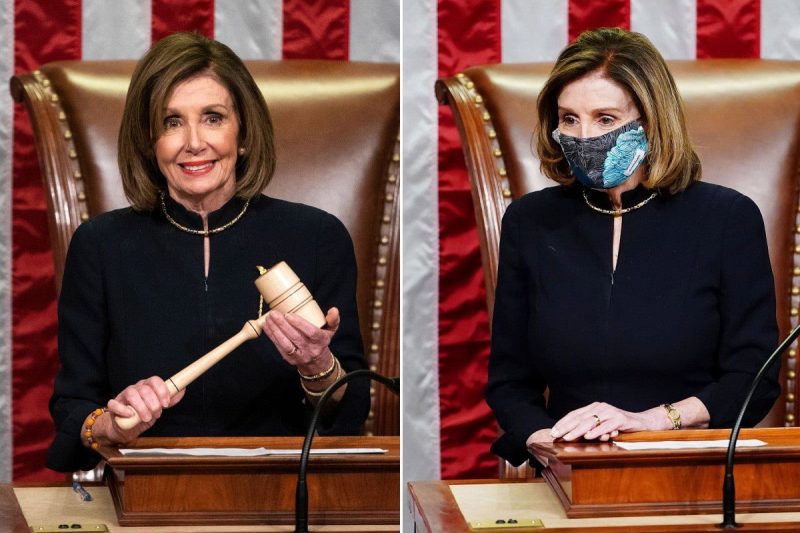 The 80 year-old four-time speaker was found to have appeared on Wednesday, wearing the same black dress and gold necklace she wore in December 2019, when the House passed two articles of impeachment accusing Trump of abuse of power and obstruction of Congress.

Those charges related to the president’s efforts to pressure the Ukrainian government to open an investigation into then-Democratic presidential candidate Joe Biden.

On Wednesday, the House passed a single article of impeachment against Trump: incitement to insurrection.

He was indicted to have incited last week’s deadly pro-Trump riot on the Capitol. Trump has thus gone into history as the first American President to be indicted twice.

The hill.com confirmed that Madam Speaker wore the same dress.

Pelosi’s deputy chief of staff, Drew Hammill, confirmed to The Hill that the Speaker was wearing the same outfit Wednesday.

According to The Washington Post, the Ann Hand brooch was inspired by the mace of the House, which dates back to 1841 and sits in the House chamber as a symbol of the sergeant at arms’ authority as well as his or her role in maintaining decorum.

As Pelosi opened debate on impeachment Wednesday, she delivered an impassioned speech stating that Trump had provoked an insurrection against the U.S. government, adding that those who participated in the riot were “domestic terrorists.”

“Those insurrectionists were not patriots. They were not part of a political base to be catered to and managed. They were domestic terrorists. And justice must prevail,” Pelosi said.

She later signed the impeachment document after a bipartisan vote of 232 to 197.