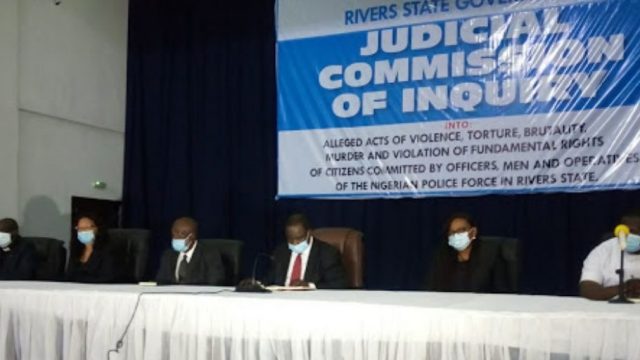 A 68-year old man from Akwa Ibom State, Elder Sunday Joel, has asked for N100million as compensation for the death of  his 30-year old son, Nsikak Joel, in the custody of operatives of the disbanded Special Anti-Robbery Squad (SARS).

Joel made the demand while testifying at the Rivers State Judicial Commission of Inquiry sitting in Port Harcourt yesterday.

Elder Joel claimed that his son, who was a crane operator, died of torture few hours after the Divisional Police Officer (DPO) in-charge of Nkpolu (Mile Three) Police Station, handed him over to the SARS operatives.

He also appealed to the Commission, chaired by Hon. Justice Chukwunenye Uriri (Rtd), to prevail on the Nigeria Police to release the corpse of his son to enable him give the deceased a proper burial.

Joel said: “On July 5, 2017, my son was arrested in a case he knew nothing about. He was taken to Nkpolu Police Station in Mile Three. At the Police station, he made his statement and the other suspect that was arrested confessed that my son was not party to the crime.

“The DPO of Nkpolu surrendered all the suspects to SARS and they were taken to SARS office at Rukpokwu. In the evening of that same July 5, my son was handed over to SARS around 6:00pm. But between 12:00 midnight and 3:00am on July 6, my son was dead through torture.

“I need justice. The justice I need is that first, they should release the corpse of my son to me for burial. Now that my son is no more, adequate compensation should be paid to me. I want N100million as compensation.”