NDDC: Malami opens up on collecting bribe from Akpabio 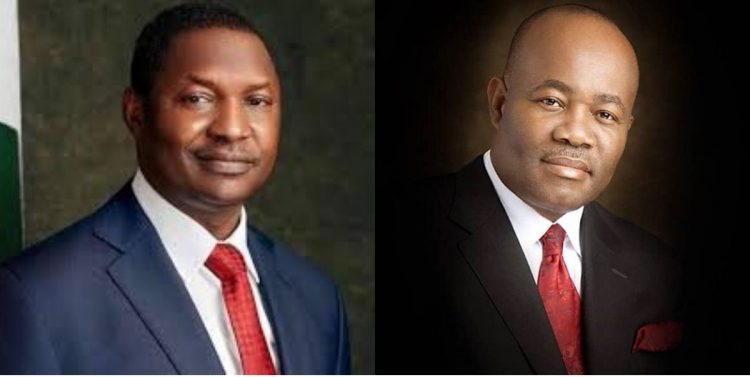 The Attorney General of the Federation and Minister of Justice, Abubakar Malami, (SAN) has denied the allegation that he collected gratification from the Minister of Niger Delta Affairs, Godswill Akpabio in respect of the appointment of a Sole Administrator for the NDDC.

Malami made the denial in a statement issued by Dr Umar Gwandu, his Special Assistant on Media and Public Relations, in Abuja, on Friday.

He said that his attention had been drawn to a fictitious and malicious publication, by alleged mischief makers, describing the report as ”fake and marred by contradictions, saying that it was a figment of the imagination of the writer, sheer fabrications and filthy assumptions of mischief makers and detractors”.

“Any discerning mind who read the story will not fail to note the desperate attempt to cast aspersions on the Attorney General of the Federation and dent his hard earned reputation, with unsubstantiated allegations spread by perfidious elements.

“The Minister, hereby, makes an outright denial of the report in its entirety.

“The Minister has not collected and does not intend at any time to receive any gratification from any dealing in discharging any function he is constitutionally empowered to perform”, the statement said.

Malami, who stated that gratification was a criminal offence, therefore, called on Nigerians to disregard the publication.

“Let individuals who have any information regarding those who facilitated, accepted, delivered or took part in one way or another in the alleged offer and purported acceptance of gratification for me or my office, come out publicly with the information with a view to exposing them and taking further necessary action’’.

He asked the purveyors of the fictitious publication to approach relevant security and law enforcement agencies, and proffer information that could lead to a criminal investigation against him, if they felt strongly enough about their purported claim. (NAN)