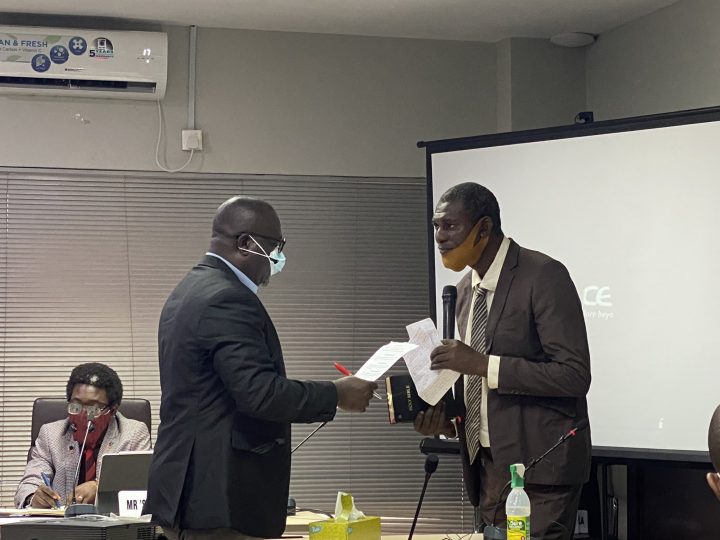 Deacon David Komolafe, a Lagos resident told the Lagos State Judicial Panel on Friday that a policeman abused and brutalised him and made him to lose his fiancée.

The petitioner told the Justice Doris Okuwobi panel that he was beaten into a pulp by an officer over a very trivial issue in 2010.

He testified that on his way to church around 5 a.m on December 30, 2010, he entered a public coaster bus to take him to church and asked a police officer in the bus politely to shift so he could sit beside him.

Deacon Komolafe said to his surprise, the officer was hostile.

He politely asked the second time that the officer should let him sit beside him.

Again the officer was hostile.

The petitioner said before he could hold his peace, the policeman pounced on him and  assaulted him.

He said the bus driver stopped the vehicle due to the commotion while other passengers tried to stop him and rescue him all to no avail.

“He dragged me down and started using his purple belt on me.

“He threatened other passengers he was going to deal with them saying that his colleagues are in Mile 2.

Deacon Komolafe said other passengers fled and left him in the police officer’s hand as he tried to defend himself.

“He tore my trousers after all the passengers fled which contained a little sum of money and seized my new Nokia C1 phone with an MTN sim.”

According to Komolafe, the policeman said he would have killed him if he had his gun.

The petitioner said he wanted justice and wanted to get back his seized properties but realized that to get justice done, he needed to get the officer’s name and force number for identification.

Deacon Komolafe said he followed the officer so he could identify him as the officer kept on beating him with an iron rod he picked on the roadside. The rod caused him serious injury.

He said he asked the officer to let them go to a nearby police station, but when the officer found out he had injured him, he tried to escape.

He tried to board another bus with my phone still with him.

“He eventually boarded a bus and I followed him as passengers in the bus pleaded with him to return my phone but he did not.

The deacon said the officer after much plea from other passengers, again threatened he would stab him to death.

The petitioner said despite that, he kept on following the officer who alighted at Doyin Bus Stop and boarded another bus.

Deacon Kayode said the officer pushed him out of the moving bus causing him additional injury.

Upon getting to Agbara, Deacon Kayode said, he picked the police officer’s number and name as he could see clearly then.

“When we got to Agbara, I could see clearly so I picked his name, Ededi with force number 443803.

He said he decided to get justice and went to complain at Agbara police station from where he was transferred to other police stations till he got to Ikeja.

The deacon said when he got to Ikeja, he was exhausted and was feeling pains seriously so he went to Ikeja General Hospital after taking pictures of himself when he was brutalized.

He said he laid his complaint to the commissioner of police who assigned one Sergeant Bello at Panti to investigate.

The petitioner told the panel that he could not go further with the case because Bello demanded N30,000 to look for the officer who assaulted him.

“Sergeant Bello demanded N30,000 which I could not afford hence, I could not go further with the case.

Deacon Kayode said his experience in the hands of the police was published by ThisDay newspaper, after which an NGO picked up his case.

The NGO took his case to the Federal High Court in Lagos.

Komolafe said he got a judgment in his favour, but up till now, the police are yet to compensate him.

Deacon Kayode said he is still coping with the emotional trauma as he lost his teeth while being brutalized.

He also said one of his ears was damaged..

He said his fiancée also saw him while trekking that very day at Oshodi with his torn trouser and presumed he was mad.

Justice Doris Okuwobi adjourned the matter till February 3 2021 for further hearing and for the police to present a witness.