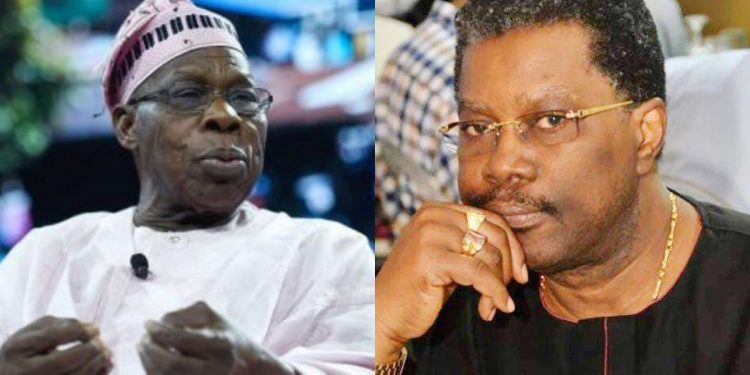 Obasanjo, who lamented his death, in a condolence letter to the deceased’s widow, Oladunni Akin-Olugbade, said he lived with him at Dodan Barracks while he was at the helms of affairs.

“Bolu spent part of his early and youthful years with me in Dodan Barracks while I was at the helm of affairs of Nigeria as a senior military officer and Military Head of State, where he enjoyed what I would term as fatherly care and tutelage from me.

“He was such a young man with promising future and he benefitted so much from my experience which he continually and steadily enjoyed until his death. Indeed, the memory of his fraternity with me as a son with such closeness will continue to linger with me and make his demise particularly painful to me,” he said.

According to Obasanjo, “It is with a heavy heart that I write to commiserate with you and the entire family on the sudden transition of your beloved husband, Dr. Bolu Akin-Olugbade. A brilliant lawyer, successful businessman, adroit politician, philanthropist and community leader, his demise is a great loss not only to his family but also to me personally, to Owu Kingdom and all Owu people as well as to Ogun State, his State of origin.

“Given Bolu’s pedigree, it is not surprising that the life of his brilliance as a lawyer began to show itself right from his days at the University of London, University of California (Los Angeles) and Cambridge University where he had his legal education. Ever resourceful and conducting himself with dignity and forthrightness, the late lawyer and business mogul acquired a well-deserved reputation for his deep knowledge in legal matters and business acumen. It is thus not surprising that he had the way of ingenious participation in several areas of the economy.”

Obasanjo said in spite of his privileged background, Bolu did not lose the common touch, as he was as passionate in his defence of Nigerian unity and was devoted to his roots.

“No wonder, he actively promoted the history and culture of his local community who also immensely benefited from his wise counsel and generosity. As Aare Ona Kakanfo and a prominent son of Owu Kingdom, our much-respected brother contributed to better understanding and harmony among our people. He was a committed and an effective representative of his people and worked for their progress.

“His unfaltering support for the general interest of Owu Kingdom and its Chiefs-in-Council cannot be over-emphasised. He was loyal, devoted, dedicated and faithful generally to Owu cause and interest. As the Chair of Owu Empowerment Committee, he gave in cash and kind. Bolu will be greatly missed by his community, Local Government Area, State and the nation in general. All Owu people have lost a great son,” he added.

He said the finality of Bolu’s death was difficult to accept, especially as he still had a lot to contribute to his community and nation in general, “but we can draw solace from knowing that he left his mark indelibly on the social and economic landscape of our beloved country. And he will always be remembered by all Owu people in Abeokuta and everywhere we have Owu settlements.”