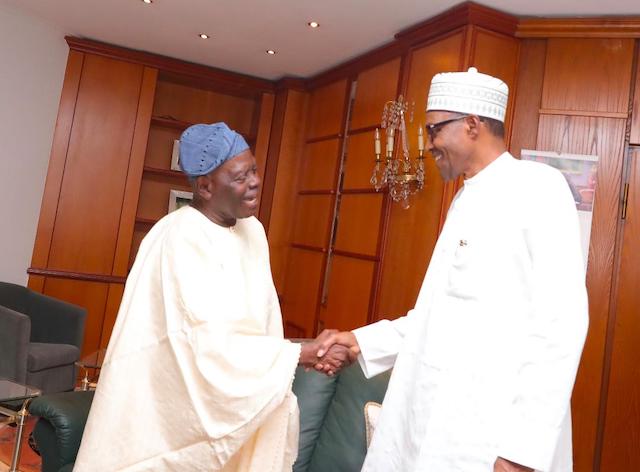 President Muhammadu Buhari has heaped praises on Chief Bisi Akande, the pioneer Chairman of the All Progressives Congress, APC, describing him as “one of the biggest and strongest pillars of democracy in the country.”

The President did not just send his “best wishes”, but also remarked that Chief Akande “is committed to service of the country and welfare of all citizens.”

“The party he helped to form and lead as the pioneer chairman has benefited tremendously, and continues to benefit from his astute leadership, wisdom and strong democratic convictions.”

The President prayed for Chief Akande’s good health and longer life so that as an elder statesman, he will continue to be useful to his fatherland and humanity.

Just like Buhari, the APC has also congratulated Akande.

In a statement, chairman of the Caretaker/Extraordinary Convention Planning Committee (CECPC), Governor Mai Mala Buni felicitated with the former Governor of Osun.

Buni said the APC is proud to note that Chief Akande’s many achievements is as a result of his sincerity of purpose and personal sacrifices he has exhibited in positions of authority he has occupied at state, national and party levels.

“The APC owes a great deal of appreciation to Chief Akande for his pivotal and progressive leadership which laid the foundation for our electoral victories in the 2015 General Election, most significantly the historic election of President Muhammadu Buhari which unseated an incumbent president for the first time in an election in Nigeria.

“Chief Akande has remained a father figure in the polity and a unifier in times when the APC needed a voice of reason to settle our differences.

“We pray for Chief Akande’s good health as he continues to contribute to the growth of our dear country and party”, Buni said.

The statement was signed by Senator John J. Akpan Udoedeghe, secretary of the committee.