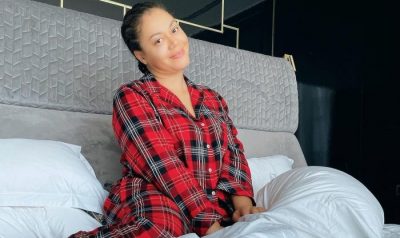 Ghanaian actress Nadia Buari, took to Instagram to display photos of her in a lovely red pajamas, and rocking cornrows, while in bed.

Buari’s popularity in Nollywood was in the film Beyonce & Rihanna, when she acted as Beyonce alongside Nollywood actress Omotola Jalade Ekeinde who played Rihanna. Her other notable Nollywood films include Rough Rider, Beauty and the Beast, Holding Hope and Single and Married.

She received two nominations for Best Actress in a Leading Role at the Africa Movie Academy Awards in 2009.

Her movie career began with her playing a role in the TV series Games People Play in 2005, which she got nominated for best actress. She has starred in more than 20 movies.

Her post read:
“It all comes down to the last person you think of at night, that’s where your heart is. ❤️