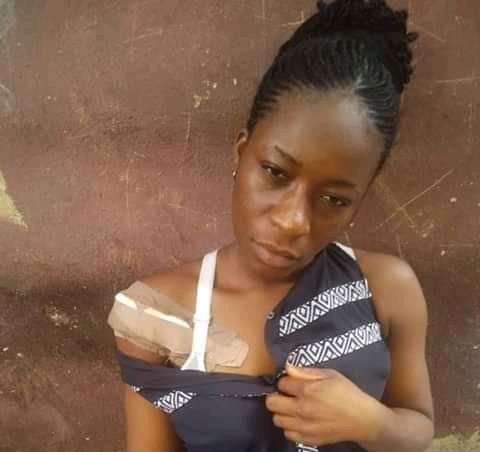 She escaped death in hands of robbers who also wanted to rape her.

But Miss Jeremiah Blessing, a 200 level student of Faculty of Management Science, University of Port Harcourt is now nursing with a deep bullet wound on her right shoulder and the accompanying pain from the encounter with the robbers.

Miss Jeremiah Blessing who was shot by members of a three- man robbery gang at the front of a public toilet close to Rivers State College of Health Science and Management Technology in Port Harcourt on Wednesday 13th January 2021 narrated her ordeal and deadly encounter with men of underworld to our correspondent.

According to her, after robbing her of her valuables, the gunmen dragged her towards the toilet in order to rape her. But her fierce struggle to free herself from their grip infuriated the gang and one them shot her because of her resistance.

“After they robbed me of all I had, including my phone, money, my handbag, ATM card and others, they seemed not satisfied. They started dragging me towards the Public toilet perhaps to rape me at gunpoint. I started fierce struggle with them. The next thing I heard was a gunshot at my right shoulder. They fled as I started shouting for help”.

She subsequently rescued by the security guards attached to the institution and students led by comrade Igwe ThankGod who called in the Police that took her to the hospital.

Jeremiah lauded security agents and President Student Union Government of College of Health for coming to her rescue and calling in the Police that took her to the hospital.

The victim appealed to security agencies to station a patrol van around the area for adequate security because others may fall victim to the hoodlums.

Comrade Igwe ThankGod, in his dual capacity as a  member of Centre for Basic Rights Protection and Accountability Campaign, CBRPAC, and the President of Student Union Government of Rivers State College of Health Science and Management Technology visited her where is recuperating.

Miss Jeremiah in the meantime has thanked the Rivers State Police command, Students and Security guards of College of Health at Ikwerre road Mile 4, Port Harcourt for coming to her aid.