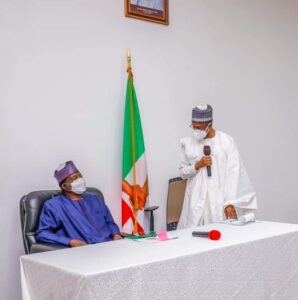 Leader of the delegation of Secretaries to the State Governments in the North, Alh. Balarabe Lawal(Right), stating the purpose of their visit to the chairman Northern Governors Forum and Governor of Plateau, Simon Lalong, during their courtesy visit on Monday at Government House Jos.

The Chairman of Northern Governors Forum and Governor of Plateau, Simon Lalong, said the Federal Government had approved payment of outstanding salaries of all workers of New Nigerian Newspaper.

The governor disclosed this while receiving secretaries to governments of the 19 Northern states, who paid him a courtesy visit, at the new Government House, Little Rayfield Jos.

Lalong said the approval would enable a final decision to be taken on the future of one of the oldest newspapers in the country.

The chairman thanked the secretaries, who were in Jos for a meeting, for supporting the northern states, saying their service and sacrifices was facilitating progress and growth of the region.

He said the forum was looking forward to the outcome of their meeting, which would form its agenda for the next meeting scheduled for the first quarter of the year.

“As governors of the region, we are well aware of the challenges we face; related to security, economy, education, health, agriculture, employment and infrastructure among others.

“While we individually address these challenges within our various states, we also realise that working together will give us faster and better results.

“If we do not work in synergy and collaboration with one another, it will be difficult to tackle issues of insecurity, which manifests in insurgency, banditry, kidnapping, violent clashes and attacks of innocent persons,” he said.

The governor also asked them to look into the issue of the Quranic Students (Almajiri) phenomenon, which the forum was committed to resolving.

The Leader of the delegation and Secretary to Government of Kaduna State, Alhaji Balarabe Lawal, said they were in the Plateau for a meeting to review some of the pending issues of the Northern Governors’ Forum, including reports that had been pending for many years.

According to him, the secretaries during the meeting, will deliberate on reports on security, economic development, education, health, investment and youth employment among others, which are critical to the progress of the region.

He said the issue of a commercial bank with controlling shares from the region, which had been on table for a long time in spite of financial commitment by some member states, needed to be resolved to boost economic revival of the region.

He commended Lalong for his proactive leadership style, which focused on key issues bothering the region.