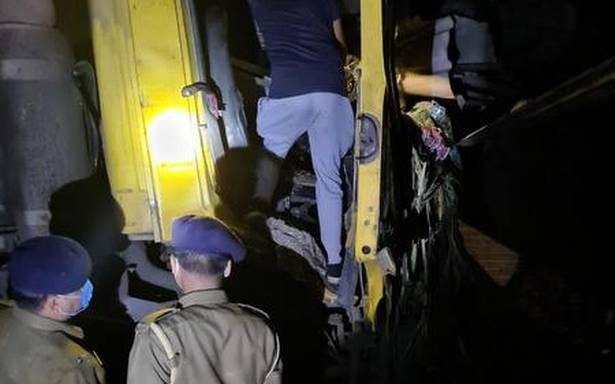 Fifteen migrant labourers were crushed to death by a truck Tuesday in India’s western state of Gujarat.

Few others injured are undergoing treatment at hospital, police said

According to police officials, the labourers were sleeping on a pavement next to a road at Kosamba village, around 245 south of Gandhinagar, the capital city of Gujarat.

While 13 people were killed on the spot, two others succumbed at the hospital, officials said.

“So far 15 people have been confirmed dead in the accident and few others are undergoing treatment at a hospital,” a police official said.

“The accident took place when a truck collided with a tractor early today, following it the truck climbed to the pavement and crushed people sleeping there to death.”

The victims were identified as labourers from Rajasthan state.

Police said they were working at construction sites in the area.

Indian Prime Minister Narendra Modi has expressed grief over the loss of lives in the accident and announced a monetary relief to the families of victims.

“The loss of lives due to a truck accident in Surat is tragic. My thoughts are with the bereaved families.

Praying that the injured recover at the earliest,” Modi wrote on twitter. “Ex-gratia of INR 200,000 (2,731 U.S. dollars) each from Prime Minister’s National Relief Fund – PMNRF would be given to the next of kin of those who have lost their lives due to the accident in Surat.

Likewise, the local governments of Gujarat and Rajasthan have announced a similar relief package for the victims.

According to federal road transport and highways minister Nitin Gadkari, every day 415 people die in the country due to road accidents and 70 percent of the deaths are in the age group of 18-45 years.

The minister said government has made a commitment that before 2025, road accidents and deaths due to it will be brought down by 50 percent with help of people’s participation.

Deadly road accidents are common in India often due to overloading, bad condition of roads and reckless driving.