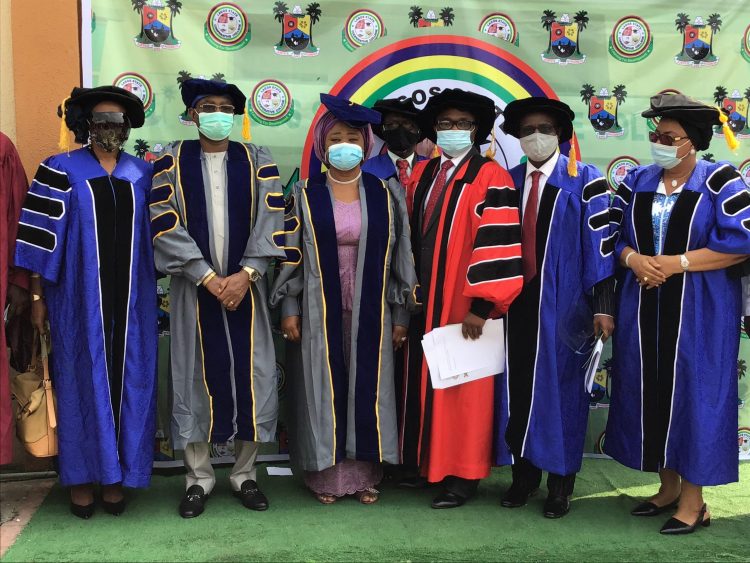 Commissioner for Commerce, Industry and Cooperatives, Dr. Lola Akande and other top echelons during the matriculation

The Lagos State Government on Wednesday warned that there will no longer be room for sharp practices in cooperative societies in the State.

Commissioner for Commerce, Industry and Cooperatives, Dr. Lola Akande gave the warning at the maiden matriculation of the Lagos State Cooperative College’s first diploma programme held at the Johnson Agiri campus of the school in Agege, Lagos.

She said that a law to that effect was already before the State Assembly and warned that anyone found culpable would be made to face the wrath of the law.

According to her, part of the training to be received by the students was aimed at reducing fraud and for them to also know their onions.

“This training will reduce fraud and ensure accountability and we will have money to do lots of things. We all are human beings, despite things put in place, you still see some people going against it. You will always find some people who will go against it. We need to inculcate in them the spirit of thoroughness.

“There is no room for cooperative fraud in Lagos State, if you do that and you are brought to the ministry, you have to pay for it,” she said.

Explaining that though over 4,460 Cooperators had been trained in certificate courses at the College, Akande noted that in 2018, the Lagos State Cooperative College became the first in the South-West to have legal backing following the signing of the Cooperative College’s law.

The commissioner re-assured the management of the College that her Ministry would continue to provide the necessary assistance to take the institution to greater heights and encouraged the matriculants to be hardworking.

The Provost of the College, Mr Akorede Ojomu emphasised that the college has zero tolerance for any act of indolence, defiance, dishonesty and unruliness which ran contrary to what the school stood for.

“We would therefore not shy away from applying necessary sanctions in instances where deviant behaviour were observed. It is therefore my belief that as matured individuals, most of whom have been previously exposed to tertiary education at one time or the other, you would be guided at all times in your conducts,” he said.

Ojomu added that the college runs three-semester diploma course to boost the capacity of the students who were already gainfully employed.

In a lecture entitled “Will Power,” the Chairman of the College’s Governing Councils, Mr. Oyebowale Raji encouraged the new students to develop their inner strength, set targets and be resolute to enable them succeed in their endeavours.