Three die as bus rammed into truck in Port Harcourt 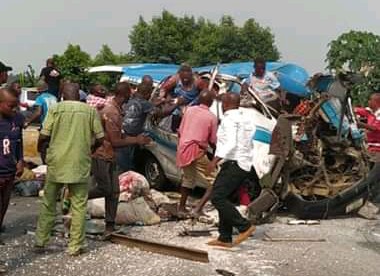 Eyewitnesses trying to rescue passengers from the bus

Three passengers were feared dead in an accident involving a commercial bus with 14 passengers and a heavy duty truck in Obio-Akpor local government area of Port Harcourt on Wednesday.

Eyewitnesses said the commercial bus which was on top speed rammed into the long heavy duty truck that was trying to negotiate a U-turn along Obiri/Ikwerre/Airport Road, resulting into the crash.

It was also learnt that it took concerned motorists and eyewitnesses time to break the wreckage of the bus to enable them drag out the lifeless bodies of those dead and others who were seriously injured in the vehicle.

“What caused the accident is a big ditch on the road which the long trailer was trying to avoid. In attempt to do that it overturned and bus which was fully loaded with passengers from Owerri, but coming from the International Airport side lost control and rammed into the truck.

“We have been complaining about this bad portion of this road. It is a federal road rebuilt by Governor Nyesom Wike’s administration. Both Federal and the State agencies should fix that spot to avoid more accidents on that spot”.

Other motorists cautioned that unless that spot is fixed, petroleum tankers full with Petroleum products may spill their contents can cause explosion and unimaginable disaster.”

Our correspondent learnt that those who were feared dead and those injured were rushed to the University of Port Harcourt Teaching Hospital, UPTH.