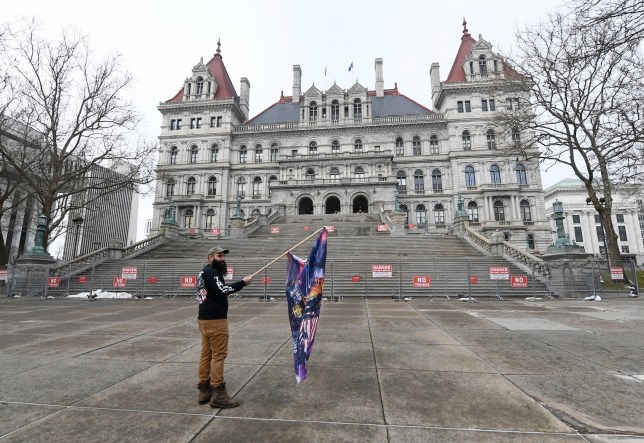 Contrary to FBI predictions, the huge anti-Biden demonstrations by Trump supporters flopped in many cities. They just didn’t show up.

The MAGA faithful were absent in Washington D.C, where President Joe Biden and Vice President Kamala Harris were sworn in just after noon today.

In New York, only one Trump supporter showed up at New York State’s Capitol.

The protester, Mark Leggiero, 28, said he drove 45 minutes to protest peacefully, and expected to see at least a thousand other Make America Great Again (MAGA) fans in attendance.

But his plea went unanswered.

Metro.co.uk reported that the New York State Capitol in Albany was sealed-off before Leggiero’s arrival.

Politicians including New York Governor Andrew Cuomo were in the building at the time to watch Biden being sworn-in, but the proceedings were closed to the public, and kept under heavy guard.

At the state house in Augusta, Maine, two supporters of Trump showed up, with one holding the placard: Stop the thief.

The US Capitol in Washington DC was guarded by 20,000 servicemen and women as Biden was sworn in – the biggest ever security operation for a presidential inauguration.

The swearing-in came two weeks to the day after the deadly riots at the Capitol, which saw hundreds of Trump supporters storm the building as Joe Biden’s election win was being certified by Congress.

Four protesters and a police officer died in the ensuing carnage, with Vice President Mike Pence and other lawmakers rushed to safety.

President Trump faces an upcoming impeachment trial for allegedly inciting the riots, and will be banned from running for office again if he is convicted.